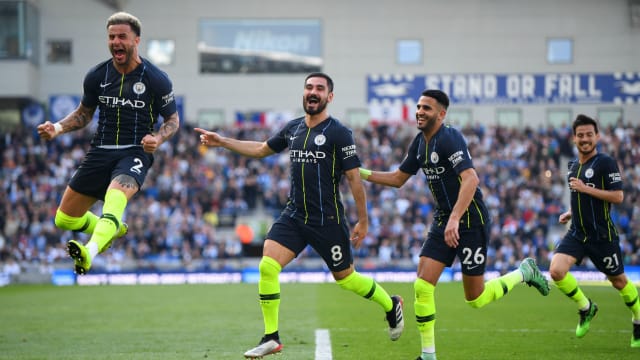 Manchester City came from behind to claim back-to-back Premier League titles with a 4-1 win at Brighton and Hove Albion.

Knowing only a final day victory could guarantee glory at the expense of Jurgen Klopp's relentless Liverpool, Pep Guardiola's men were stunned by a 27th-minute Glenn Murray opener.

Final-day specialist Sergio Aguero found a response within 83 seconds and Aymeric Laporte converted Riyad Mahrez's 38th-minute corner to put City back in control of their destiny.

Mahrez, a surprise selection after an underwhelming debut season at the Etihad Stadium, made good on his record-signing status and Ilkay Gundogan added further gloss for the raucous travelling supporters who have now seen their team prevail in four of the past eight Premier League seasons.

City were far from their fluent best early on and, after the Albion faithful merrily relayed news of Sadio Mane's 17th-minute opener against Wolves in an eventual 2-0 win at Anfield, they fell behind.

Murray found himself on the right end of a mismatch with Oleksandr Zinchenko when he converted Pascal Gross' corner at the near post.

The response was instant and clinical, with Aguero drilling David Silva's delightful flick through the legs of Mat Ryan.

Brighton's goalkeeper then denied Bernardo Silva and Mahrez but erred in letting the latter save dribble behind. Laporte rose gleefully to power in Mahrez's looping delivery.

A rasping Gundogan drive after half-time failed to penetrate a mass of bodies, although Ryan did not do the efforts of those in front of him justice in the 64th minute.

Mahrez deftly sashayed into space but found the ball on his weaker right-foot. The winger struck his speculative effort well, but Ryan should have done better than slapping into his top corner.

The Australia international was helpless 18 minutes from time as Gundogan – possibly on a farewell appearance for City as a new contract remains unsigned – curled in a majestic free-kick to get the party started.

What does it mean? Guardiola cements his legacy as City eye dominance

Last season's 100-point procession saw City break records but it was a largely pressure-free exercise. This time around, it is hard to imagine greater scrutiny than that supplied by Liverpool, with 98 points besting 97 in an echo of Guardiola's unforgettable tussles with Real Madrid while at Barcelona. City are the first team to retain the Premier League since Alex Ferguson's Manchester United did so in 2008-09. With Guardiola at the wheel, a similarly dominant period could be in prospect on the other side of Manchester.

Not a moment that will quite rank alongside his last-gasp heroics against QPR in 2012, but City's day might have unravelled without Aguero's expertly dispatched equaliser. Guardiola's team failed to fire before falling behind, with the latest manifestation of the near on-field telepathy enjoyed between David Silva and Aguero coming at the perfect moment.

There has been a social media trend among Liverpool supporters over recent weeks of changing their online avatar to a picture of whatever striker was next in line to try to derail City's title defence. Where Ashley Barnes and Jamie Vardy failed, Murray succeeded by giving Brighton the lead. However, he gave away possession for the quickfire equaliser and afforded Laporte the freedom of Sussex for City's crucial second.

City pursue an unprecedented domestic treble when they face Watford in next weekend's FA Cup final, while Brighton face a close season of reflection and reassessment. They avoided relegation but closed their Premier League campaign with a run of nine winless matches.