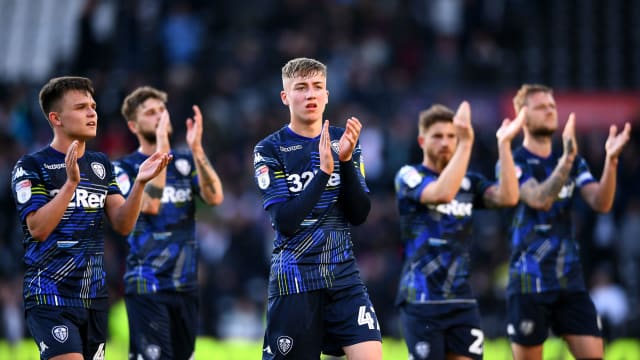 Kemar Roofe's goal handed Leeds United a 1-0 lead in their Championship play-off semi-final against Derby County, who controversially had a penalty overturned.

With neither side having had a shot on target in a tightly contested first half at Pride Park, Marcelo Bielsa's team went ahead thanks to Roofe's neat first-time strike 10 minutes into the second half.

Referee Craig Pawson did well to play the advantage following a late lunge by Tom Lawrence, with Jack Harrison driving clear down the left before curling in a cross for Roofe to finish beyond the onrushing Kelle Roos.

Roofe squandered a golden chance to make it 2-0 two minutes later, and that profligacy looked to have been punished when Pawson awarded Frank Lampard's side a penalty after Harrison and Jayden Bogle collided in the 76th minute.

However, the referee changed his decision after a check with his assistant and awarded Leeds a free-kick, much to Derby's chagrin.

Leeds could have doubled their lead in the closing stages, but Roos made a fine save to deny Jamie Shackleton, while Mateusz Klich was fortunate to escape with just a booking when he moved his head towards Fikayo Tomori's chest late on.

And despite a late rally from the hosts, Leeds held firm to record their third win over Derby this term and take a slender advantage into the return match at Elland Road on Wednesday.

17 - None of the previous 17 teams to lose at home in the first leg of a second tier play-off semi-final have gone on to progress to the final, with Derby themselves failing to do so after losing 0-3 to Hull City in 2016. Mountain. #EFL #EFLPlayOffs pic.twitter.com/ZwbAP2rgjo