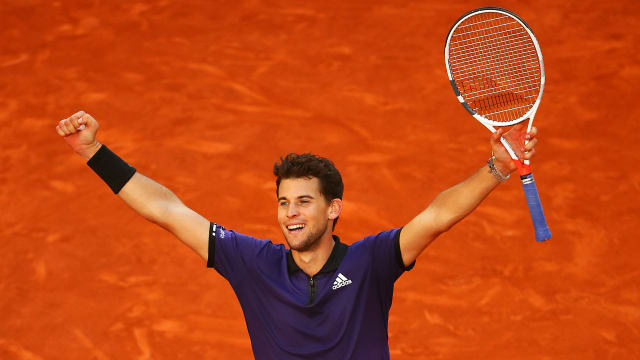 Dominic Thiem again showcased his proclivity for upsets on the clay with victory over Roger Federer at the Madrid Open, but will face a rested Novak Djokovic in the last four.

Runner-up in 2017 and 2018, Thiem will have to overcome Djokovic to reach a third successive final at Caja Magica, the world number one having the benefit of a walkover after Marin Cilic withdrew due to food poisoning.

As for Nadal, he progressed to his 70th Masters 1000 semi-final by crushing Stan Wawrinka and will meet Stefanos Tsitsipas after the Greek ended the reign of defending champion Alexander Zverev with a three-set victory.

Rafa can do no wrong tonight!

Having been outclassed in the first set, Thiem faced two match points in a second-set tie-break with Federer.

However, he saved both to win an enthralling shoot-out and subsequently prevailed in a decisive set in which the Swiss great noticeably ran out of steam, Thiem winning 3-6 7-6 (13-11) 6-4 in two hours and 11 minutes.

Thiem beat Djokovic at Monte Carlo last year and at the 2017 French Open but knows he will be facing a very different animal this year, with the world number one having claimed titles at Wimbledon, the US Open and Australian Open since their last meeting.

"The test today was huge, and tomorrow is a different game, of course," said Thiem. "But I was playing Novak last year, and two years ago, and he was not at his best.

"Now he is again. He's won the last three grand slams and he is at the top of the ATP Ranking again. So, the challenge couldn't be bigger… I'll try to keep up my good momentum which I have now and give my best again."

Tsitsipas claimed a second successive win over Zverev, coming through 7-5 3-6 6-2, but history is not on his side going into his clash with Nadal.

The 20-year-old is 0-3 against the King of Clay, although he believes anything is possible when he is in this vein of form.

"I'm really happy and satisfied with my performance. I think I deserved the match at the end. I was playing really well, feeling really comfortable on the court," Tsitsipas said.

"When you feel like this, you can do miracles."

The defending champion is out!

He needed just 69 minutes to claim a 6-1 6-2 victory, progressing through to his 11th semi-final in the Spanish capital.

And he knows the same will be required to fend off Tsitsipas.

"It was a great performance," Nadal said. "I'm happy, it was an important moment for me and I'm really happy to be through this way.

"It's going to be a tough one [against Tsitsipas], I hope to be ready for it. I'll need to play my best."