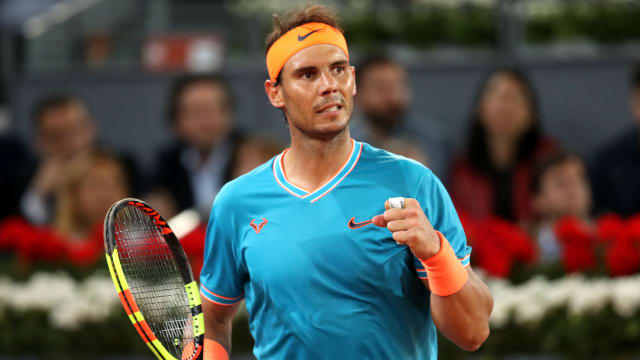 Rafael Nadal demolished Stan Wawrinka in straight sets on Friday to reach the semi-finals of the Madrid Open.

The world number two needed just 69 minutes to seal a 6-1 6-2 victory and set up a showdown with Stefanos Tsitsipas in the last four.

Nadal beat Wawrinka in two sets in the 2013 final at Caja Magica and produced a similarly ruthless display to dispatch his Swiss opponent once more.

He broke to love twice in a first set that lasted less than half an hour, against a player who had not previously dropped serve in this year's tournament.

Wawrinka rallied somewhat at the start of the second but was broken again in game five despite offering some stubborn resistance.

Nadal took the next two games and then saw out the contest with his first match point, pumping his fist as Wawrinka sent a backhand slice wide.

He will meet Tsitsipas, who defeated Alexander Zverev in three sets, in the semi-final - the 70th of his storied career at Masters 1000 level.