Djokovic into Madrid semi-finals thanks to Cilic withdrawal 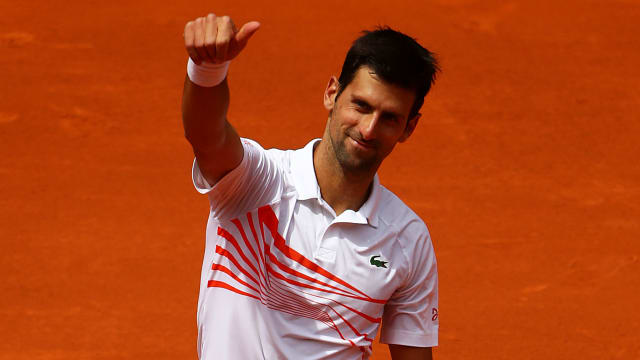 Novak Djokovic was handed a walkover to the Madrid Open semi-finals for the second time in three years as quarter-final opponent Marin Cilic pulled out of the tournament due to food poisoning.

Ninth seed Cilic explained on Twitter that he had experienced "a terrible night dealing with a case of food poisoning" and would therefore be unable to face Djokovic for a 20th time on the ATP Tour.

The world number one, a two-time winner of the tournament, therefore advanced to a sixth Madrid Open semi-final, where he will face either Roger Federer or Dominic Thiem, who meet later on Friday.

In 2017, Djokovic also reached the semi-finals without hitting a ball at the last-eight stage as his opponent that year, Kei Nishikori, withdrew because of a wrist injury.

Cilic had been on a dreadful run of form prior to this week, winning just one of his previous six matches since the Australian Open.

He needed to stave off four match points against Martin Klizan before progressing beyond the opening round in Madrid, where he then recorded victories against Jan-Lennard Struff and Laslo Djere to reach the last eight.

Dear fans, @mutuamadridopen organizers, @DjokerNole I am sorry to announce that I must withdraw from today's match. I have had a terrible night dealing with a case of food poisoning. I am extremely disappointed to have my time in Madrid end in this way. Thank you for the support.