Curry points the finger at 'sassy' Nuggets after Barton clash 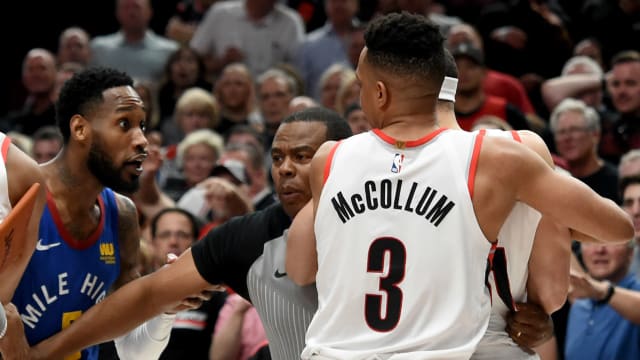 Seth Curry stoked the fire by stating the Denver Nuggets have "a few sassy dudes" after the Portland Trail Blazers guard clashed with Will Barton in Game 6.

Curry and Barton had to be separated in the final quarter when things got heated at Moda Center on Thursday.

The Trail Blazers went on to set up a Western Conference semi-final decider with a 119-108 victory.

Curry claimed Barton was to blame for their altercation.

"You know what I'm saying. I can't allow people to put their fingers in my eye.

"That's real sassy. They got a few sassy dudes over there. Front-runners. And we can't allow that."

Nuggets forward Barton gave a different account of the incident.

"He fell right into my knees, look at the replay. I was trying to protect myself. Curry came over and gave me a little push, I gave him a little push back and that was it," said Barton.

"We probably said some stuff, I don't remember everything in the heat of the moment."