Irving brushes off questions on future after Celtics bow out 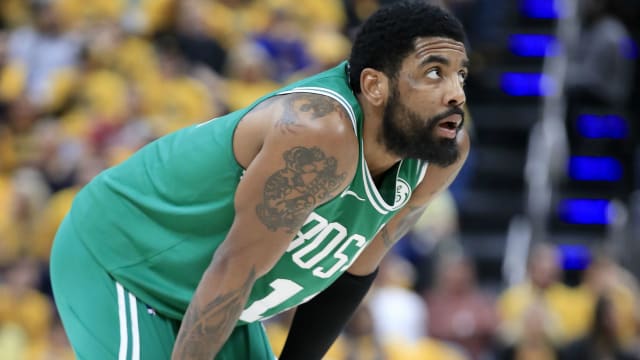 Kyrie Irving was vague on his future as the soon-to-be free agent sidestepped questions following the Boston Celtics' exit from the NBA playoffs.

Irving and Boston's season came to an abrupt end after the Milwaukee Bucks won 116-91 in Game 5 of the Eastern Conference semi-finals on Wednesday.

Celtics star Irving – who has been linked with the New York Knicks and Brooklyn Nets ahead of free agency – scored 15 points on six-of-21 shooting as the Bucks sealed a 4-1 series success.

Amid questions over his future, Irving told reporters: "I'm going to be honest, I'm just trying to get back to Boston first, safely. See my family, decompress, do what human beings do."

Irving, who won the 2016 championship with the Cleveland Cavaliers before joining the Celtics in 2017, added: "Truth be told, it's no time to be disappointed. You take your lessons, you take your arse-whipping that they handed us, and you move on. It's a basketball journey.

"Obviously you want to keep playing, but they put a halt to that. They deserved this series, they wanted it, and I'm looking forward to seeing them go to the Eastern Conference finals and the next opponent.

"It was a great opponent for me to play against for the rest of my career because I know I won't forget something like this, and the taste of defeat in this type of style, being down 1-4, I haven't felt. For me, it's just moving on to the next thing, and just seeing where that ends up."

Asked if uncertainty over his future weighed on him throughout the series, Irving replied: "No, no."