Halep on course for number one as Kvitova's bid ends 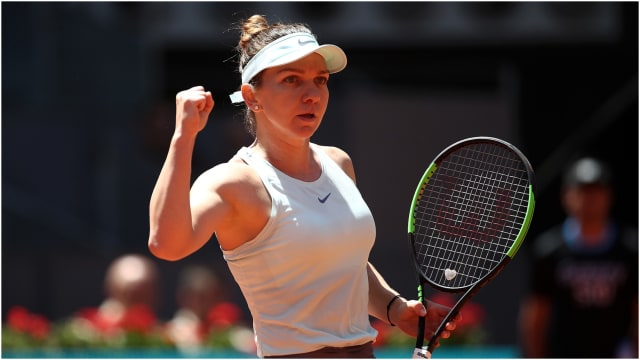 Simona Halep took a huge stride towards a return to world number one on Thursday as she advanced at the WTA Madrid Open, while top-ranked Naomi Osaka was beaten.

Osaka has struggled to convinced since taking the number one spot with a second consecutive grand slam title at the Australian Open in January, while clay-court specialist Halep is in top form in Spain.

And Halep now knows she will replace Osaka at the summit if she triumphs this week, having seen the Japanese beaten by Belinda Bencic in three sets.

Romanian star Halep, meanwhile, took down Ashleigh Barty 7-5 7-5 to set up a meeting with Bencic.

The other semi-final will be between Kiki Bertens and Sloane Stephens, with second seed and defending champion Petra Kvitova absent after she was blown away by the former in the day's late match.

Stephens defeated Petra Martic in straight sets to move into her first semi-final of the 2019 WTA Tour season.

She has been in fine form this week and could be going back to number one, but Halep is still feeling the effects of the hip injury that kept her out of the Stuttgart Open.

"Maybe it's because I was relaxed and had no expectations - it's always like this. To play the semi-finals here is a very good result for me coming after the disappointment in Fed Cup."

Osaka admitted that the thought of losing her top ranking might have contributed to her defeat.

"I think I was just thinking about too many things," she said. "I wanted to win this match so much.

"Also people have been telling me, if I get to the semis here, of course I can stay number one. So I wanted to do that and I was thinking about that while I was playing, which wasn't necessarily a good thing."

Down goes No. 1!@BelindaBencic knocks out Osaka, 3-6, 6-2, 7-5, to seal a semifinal berth at the @MutuaMadridOpenpic.twitter.com/zi0p7cJG1D

NO HISTORY FOR KVITOVA

But it is Bertens who will instead face Stephens, catching Kvitova cold after three prior straight-sets victories. The Dutch star ran out a 6-2 6-3 winner.

"I'll have a game plan and try to figure it out with my coach," Stephens said. "Obviously it's a big occasion, a semi-final."