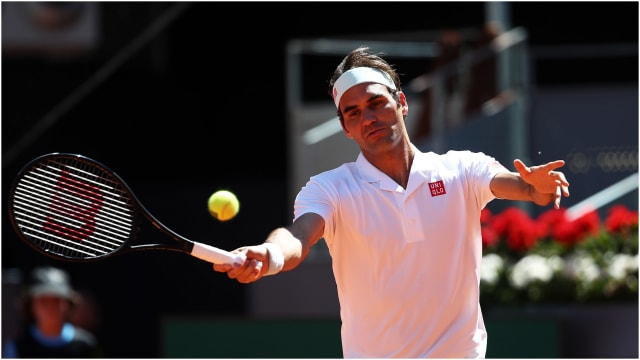 Roger Federer was forced to save two match points as he battled into the Madrid Open quarter-finals, after Gael Monfils recovered from an appalling start to almost eliminate the world number three.

Federer returned to the clay courts this week and remains on course for a challenge come Sunday after a 6-0 4-6 7-6 (7-3) victory, yet he came extremely close to being beaten in a remarkable contest.

While Monfils has caused Federer problems in the past, he looked to be down and out in their first meeting for almost four years after starting with a miserable bagel that had the Spanish crowd jeering his display.

The 18th-ranked Monfils appeared to be motivated by the vocal criticism and took the second, but he could not close out the third and 20-time grand slam champion Federer scraped through.

Both players served extremely sloppily early on, but Federer was soon in command without moving out of second gear and Monfils' frustration appeared to boil over as a one-sided opening set lasted just 18 minutes.

A huge roar went up as the Frenchman held in the opening game of the second, though, and he then masterfully out-fought and out-thought Federer for an unlikely break.

Monfils' mood looked to be lifted and, while he was soon pegged back after initially withstanding Federer, he kept the pressure on and closed out the set on his opponent's serve.

When some lax play saw the Swiss slip behind in the decider, it was Federer who displayed his anger, thrashing a ball out of the arena as Monfils closed on an improbable victory.

A sublime return drew Federer back level, though, and then he came to the net to bravely hang on at match point, continuing to fend off Monfils to tee up the tie-break.

Monfils started with a double fault and then saw Federer close the door, coming up with some superb defensive work to belatedly win in just over two hours.