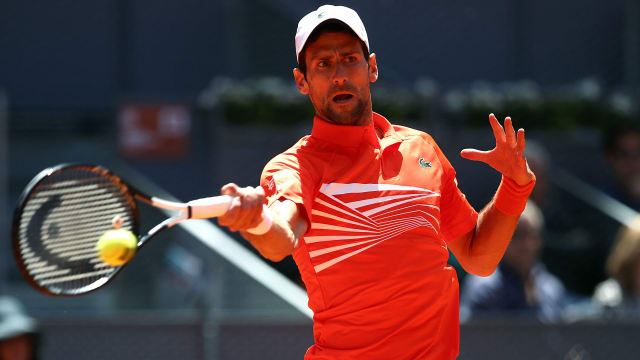 Top seed Novak Djokovic maintained his perfect record against Jeremy Chardy to march into the quarter-finals of the Madrid Open.

Djokovic played with a swagger in the first set before Chardy warmed to the task in the second, but was unable to win a set point at 5-4 on Court Manolo Santana.

The 15-time grand slam champion came out on top in a tie-break and will face Marin Cilic in the last eight after winning 81 per cent of points on a first serve that laid the foundations for yet another win over the 47th-ranked Chardy.

Djokovic started with a spring in his step and led 2-0 when Chardy drilled a forehand into the tramlines after maneuvering the Serb to other side of the court.

Chardy was feeling the pressure and gifted Djokovic another break with a double fault, then his frustration heightened as the two-time Madrid champion held for a 5-0 lead after being 0-40 down.

The Frenchman got on the board with a blistering backhand winner on the run, which prompted a thumbs up from Djokovic, but the set was over in only 32 minutes when he fired a backhand wide.

It was a different story in the second set, with Chardy causing the 2011 and 2016 champion far more problems, serving impressively and reducing the unforced errors.

There were no break points in the second until Chardy forced one for the set, but Djokovic's serve got him out of trouble.

An errant forehand in the first point of the breaker from Chardy gave Djokovic the upper hand and he sealed victory with a sublime forehand winner.