'Bull****' – Smart says Irving not to blame for Celtics exit 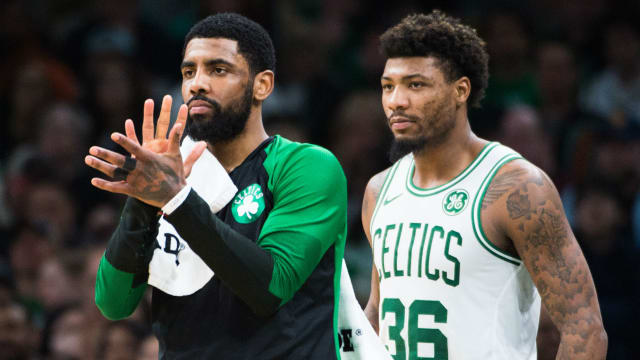 Marcus Smart insisted Kyrie Irving is not to blame for the Boston Celtics' elimination from the NBA playoffs, describing the suggestion as "bull****".

Boston's season came to an end on Wednesday, the Celtics beaten 116-91 as the Milwaukee Bucks claimed a 4-1 series victory in the Eastern Conference semi-finals.

Soon-to-be free agent Irving – who has been linked with the New York Knicks and Brooklyn Nets – has been criticised for his poor performances throughout the second-round series.

When Smart addressed the media on Thursday, he defended the six-time NBA All-Star.

"Bull****. That's bull****," Smart said when asked if Irving's leadership skills were behind the Celtics' lack of chemistry. "Not one of us on this team knows what Kyrie has been through. Probably a few amount of people in this world know what Kyrie goes through. It was hard for him as well.

"He was forced into a situation where it was business over the friendships. He had to come into a situation knowing this is a group of guys that had something going before [he came] here. 'How will I fit in?' He didn't want to disrupt that. That says a lot.

"This is Kyrie Irving we're talking about it, and he's worried about coming in and disrupting us. We took him in with full arms. We tried to understand. But like I said, we never really understood because we're not in his shoes. That's just a bull**** statement to say his leadership skills killed us."

“I think if you asked anybody on the team we wish we could do it over." pic.twitter.com/JjzQahBeYi

Irving shot 30.1 per cent from the floor (25 for 83) in the team's four losses to the Bucks and was six-for-21 shooting in the Celtics' final game, finishing with 15 points.

"We just couldn't find a way to do it. It's nobody's fault. It happens," Smart added. "It's four other guys out there, 13 other guys on the team. Coaches and everything. To just blame it on one guy is bull****."

Irving's future in Boston is uncertain with the possibility of becoming a restricted free agent in the offseason.

For Smart, who finished the first season on a four-year deal, he will leave that part to Irving himself.