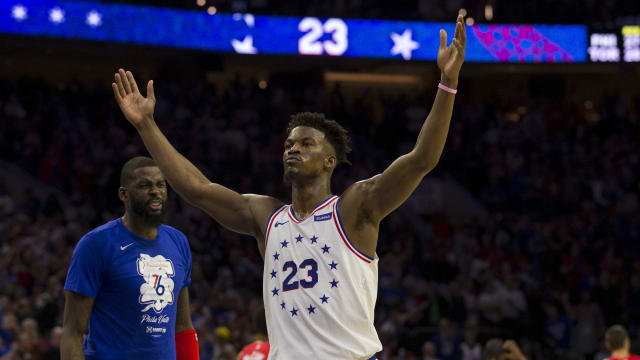 The Philadelphia 76ers forced a deciding Game 7 against the Toronto Raptors in their NBA Eastern Conference semi-final.

After being blown away in Toronto, the 76ers eased past the Raptors 112-101 in Philadelphia on Thursday.

Jimmy Butler led the 76ers on home court as Philadelphia earned a chance to go back to Canada and fight for the right to play the Milwaukee Bucks in the Conference finals.

Here are three takeaways from the 76ers' series-levelling victory:

There are certain players in the NBA who can will their teams to wins no matter how his counterparts are playing. Butler can often be one of those guys and he was just that in Game 6.

While Butler did not go off for 50 points or completely shut down Kawhi Leonard, he closed out the first half with a flurry of buckets, which gave Philadelphia a 15-point lead going into the break and completely set the tone for the final 24 minutes.

Butler finished with 25 points, six rebounds and eight assists, but his energy was palpable in the win on Thursday. If he shows up and plays with that same kind of intensity in Game 7, the 76ers will win this series.

2. Why would Kawhi re-sign with Raptors?

We are legitimately asking this question — why would Leonard re-sign with the Raptors after watching the way this series has gone?

Leonard has been his typical otherworldly self in these games, averaging 29 points, 12 rebounds and five assists, but his team-mates have been AWOL for much of the time.

Kyle Lowry — the Raptors' $33-million man — has been particularly suspect throughout the playoffs as he was averaging 12.6 points on 42.1 per cent shooting (28 per cent from the three-point line) coming into Thursday's game.

In Game 6, the Raptors got 23 points off the bench — and a good portion of that (nine points) came from Serge Ibaka — while the rest came in garbage time.

If Leonard is not going to get support in Toronto, there is not much incentive for him to come back, so honestly why would he?

In basketball, people always like to talk about how things players do does not show up on the scoresheet. Joel Embiid is not typically one of those players as he is one of the most productive big men in basketball. In Game 6, however, his game was about what he did that most people will not see.

While he is not 100 per cent, he controlled the paint for much of the game as Philadelphia dominated the contest in points scored there. Embiid's defense also proved especially disruptive all over the floor.

He had a good night points-wise, but where his worth truly showed up was in his plus-minus. He finished the night plus-40, which was 11 points more than any other player and 25 more than any other starter. And this came on a night where he scored just 15 points and added 12 rebounds.

Embiid was great in Game 6, even if he might now have appeared to have been at his most productive.