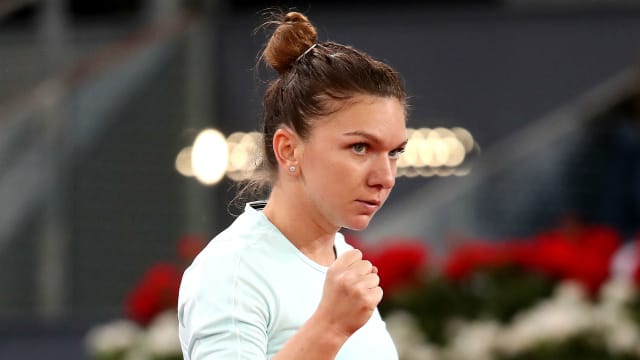 Simona Halep demolished Viktoria Kuzmova as she raced into the Madrid Open quarter-finals with a ruthless double-bagel victory on Manolo Santana on Wednesday.

Former world number one Halep obliterated the unseeded Kuzmova 6-0 6-0 in just 44 minutes, dropping just six points on serve in a clinical display in the Spanish capital.

It is just the second time the two-time Madrid champion, seeded third, has pulled off a double bagel on the WTA Tour and her reward will be a last-eight clash against Ashleigh Barty or Yulia Putintseva.

Kuzmova, 20, won just 12 points in the entire match and was broken to love twice in succession in the second set as she was completely outclassed.

The Slovakian was successful with just 37 per cent of her first serves and won just six points behind it across a dismal display.

She only needed 44 minutes to close out the match 6-0, 6-0 over Kuzmova.@Simona_Halep showed her skills at the #MMOpenpic.twitter.com/iUUEbFVo6E

Halep's ferocious start was unchecked by an early pause in play to close the roof due to rain, and she felt the conditions ended up benefitting her.

"[The roof] was good for me because the game was faster and I could play my best style. I think everything went very well for me today. I felt the ball, every single shot," Halep said in an on-court interview.

"I don't think it was [Kuzmova's] best match. Maybe she was nervous before the match a little bit. It's a big tournament and it's not easy to face the top players. I've been in that position. I played my best tennis and I felt good on court.

"I have doubles today [so] I will have to play a little bit more, but it's a good day and I've started well. To be back in the quarter-finals in this tournament means a lot to me."