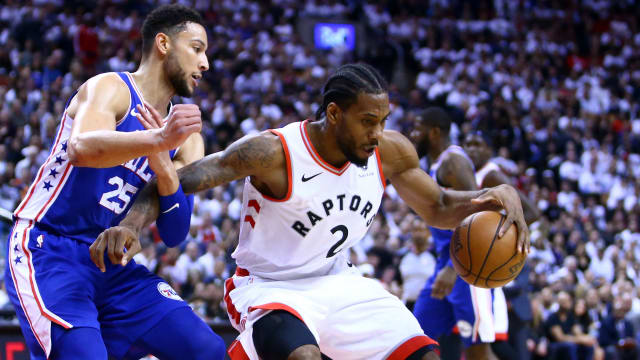 Kyle Lowry was pleased the Toronto Raptors stepped up and enabled Kawhi Leonard to "rest a little bit" in their blowout victory against the Philadelphia 76ers in Game 5 on Tuesday.

Leonard recorded his lowest points tally so far in the Eastern Conference semi-final series, scoring 21 as the Raptors won 125-89 at Scotiabank Arena to take a 3-2 advantage.

The three-time All-Star dropped 45 and 39 in Toronto's other two wins against Philadelphia, but Pascal Siakam (25), Lowry (19) and Danny Green (17) made telling contributions in their latest victory.

Lowry said: "It was a good team win. We needed a type of game where everyone played well, I don't think we had one like this in a while.

"We've still got another level I think we could play at offensively and defensively, but it was a good team win. We needed that type of win for our team.

"I think this was one of the games where we let [Kawhi] rest a little bit, which is important. And I wouldn't say he rested, he still had 21 points, he was aggressive – 13 rebounds – and he had a big double-double, but he didn't have to do everything offensively.

"Those are the things we need to do as a team to continue to get better. We're still going to rely on him a lot, rely on him to score and get buckets, but tonight he did everything else.

Leonard missed 22 matches in the regular season and Siakam, who scored just nine points on two-of-10 shooting in Game 4, felt the Raptors just did what they have been doing since the start of the campaign.

"We are a team and I think all year that's what we've done. Even times when Kawhi didn't play we always came together," said Siakam.

"Kawhi's an amazing player and when there's nights he's going the way he's going and scoring 40s and making all those shots, it's kind of amazing to see. But at the same time, we know we're a team and have each other's back.

"We've just got to keep playing and whoever is hot that night … we have to step up, we have to play better and the whole team knows that."