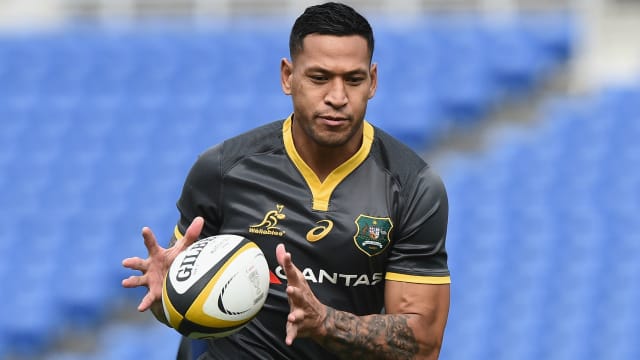 A three-person panel is considering a sanction following the end of Israel Folau's hearing into a "high-level breach" of Rugby Australia's (RA) code of conduct.

Wallabies and Waratahs back Folau was contesting the breach notice issued to him in the aftermath of his latest controversial social media activity.

Folau sent out an anti-homosexual post, saying "hell awaits you", having last year been warned by RA for similar comments.

A hearing, to determine whether RA's intent to terminate Folau's contract will be upheld, concluded on Tuesday and the panel judged the player had committed a "high-level breach" but will now take time to receive written submissions before deciding on a sanction.

A statement from RA read: "The code of conduct hearing in the matter of Israel Folau has concluded in Sydney today.

"A panel of John West QC (chair), Kate Eastman SC, and John Boultee AM presided over the three-day hearing which commenced on May 4.

"The panel has today provided a judgement that Israel Folau committed a high-level breach of the professional players' code of conduct with his social media posts on April 10, 2019.

"The panel will now take further written submissions from the parties to consider the matter of sanction.

"A further update will be provided after the panel delivers its decision on sanction."