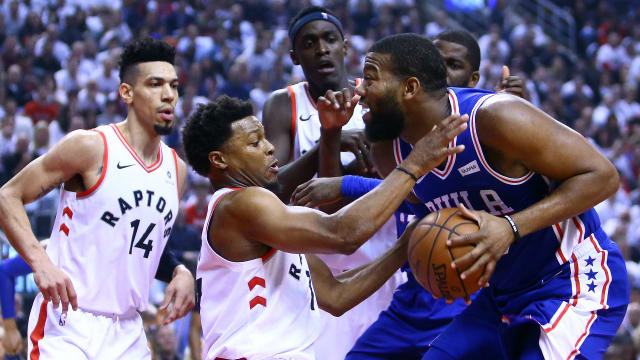 The Toronto Raptors cruised to an easy win in the NBA playoffs on Tuesday.

Toronto took control early, pushed their lead to 21 by half-time and pulled away from there to secure a 125-89 Game 5 victory over the Philadelphia 76ers at Scotiabank Arena.

The win gave the Raptors a 3-2 advantage in the second-round series.

"I was certainly not expecting that kind of game. Obviously, we're certainly happy with the result. We did a lot of good things," Raptors coach Nick Nurse told reporters after the game.

"We made some [shots] tonight and I think that really fuels you. It really gives you an energy and a momentum boost ... We played both ends pretty well tonight."

The series will now shift back to Philadelphia for Game 6 on Thursday with the 76ers on the brink of elimination. If they win that matchup, the Raptors would host Game 7 on Sunday.

The @Raptors take a 3-2 series lead over @sixers with the Game 5 home victory! #WeTheNorth#NBAPlayoffs

Here are five crazy stats from the Raptors' blowout win

– All five starters and six total players reached double figures for the Raptors in the easy win. Pascal Siakam led the way with 25 points while Kawhi Leonard added 21 points and 13 rebounds. Serge Ibaka chipped in 10 points off the bench.

– The 36-point margin made this the biggest postseason win in the Raptors' franchise history.

– The 76ers turned the ball over 19 times compared to the Raptors' 10. Philadelphia stars Joel Embiid and Ben Simmons combined to commit 13 of those turnovers.

– The Raptors held a 27-26 advantage at the end of the first quarter. The team that have led after the first 12 minutes have now won every game of this series.

– Philadelphia made just six of their 24 three-point attempts in the loss. Embiid connected on just two of his six shots from long range, Jimmy Butler missed both of his and the 76ers bench combined to knock down two of their 10 attempts from behind the arc.