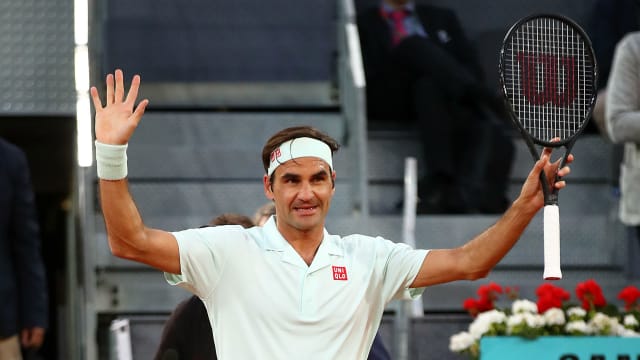 Roger Federer revelled in a "special" clay-court comeback as he outclassed Richard Gasquet after Novak Djokovic joined him in the third round of the Madrid Open on Tuesday.

You would never have known Federer had not played a clay-court match for three years as he eased to a 6-2 6-3 victory over Gasquet on Court Manolo Santana.

World number one Djokovic made light work of securing his passage into the last 16, beating qualifier Taylor Fritz 6-4 6-2.

Dominic Thiem, on a high after winning the Barcelona Open, moved into round three when Reilly Opelka retired after losing the first game of the final set.

David Ferrer's retirement will have to wait until another day following a 6-4 4-6 6-4 victory over fellow Spaniard and close friend Roberto Bautista Agut in his homeland.

Stan Wawrinka and Marin Cilic were among the other winners at the Caja Magica, defeating Pierre-Hugues Herbert and Jan-Lennard Struff respectively.

FED IMPERIOUS BACK ON RED

Federer said he was making his return on the red surface in hope rather than expectation, but he put on an exhibition to topple Gasquet.

The 20-time grand slam champion struck 28 winners and did not face a single break point in a second-round match that was over in 52 minutes, setting up a meeting with Gael Monfils or Marton Fucsovics.

Federer – who last played on clay in 2016 – said: "I grew up on this surface so I feel comfortable about that. I think Richard was also maybe a little bit hurt from his match yesterday, so it was nice seeing him back after so many months being away from the Tour with injury.

"I think for both of us it was a special match being back here in Madrid."

Fritz dumped out Grigor Dimitrov in the first round, but Djokovic was a cut above the American qualifier.

The top seed won through to an encounter with Diego Schwartzman or Jeremy Chardy at a canter, winning 85 per cent of points on his first serve and capitalising on all three break-point opportunities.

Djokovic said: "I thought the second set I read his serve better and just managed to put an extra ball in to the court and he made a lot of unforced errors.

"And I don't think he was playing at his best today. But I think it was a solid opening match for me in the tournament."

Ferrer will retire after the tournament on home soil and the wildcard is determined not to bow out with a whimper.

The 37-year-old will take on defending champion Alexander Zverev in the second round after getting the better of his compatriot.

"I'm trying to enjoy the moment I have right now. I want to be with my family and try to enjoy as much as possible the time that I have to play in this centre court." he said.

"And tomorrow I have another opportunity and I'll go out there to try to enjoy every single feeling that I might experience out there."