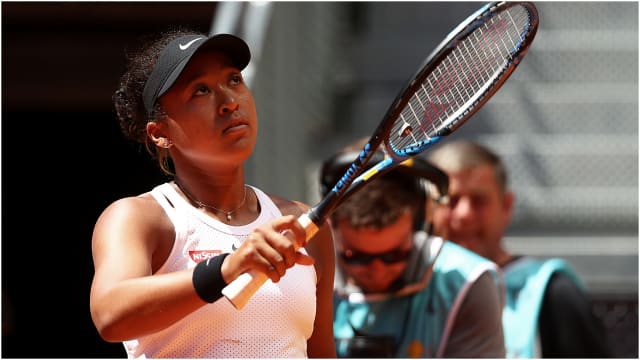 Naomi Osaka survived three sets against Sara Sorribes Tormo at the Madrid Open on Tuesday despite a wildly inconsistent performance.

The world number one dictated the outcome of the match with her errors too often letting Sorribes Tormo in, while some outstanding pieces of play contributed to the eventual 7-6 (7-5) 3-6 6-0 result.

Osaka questioned any criticism of her form at the Stuttgart Open, but this display too often slipped below the standards expected of a two-time grand slam champion in the opening two sets, with the 73rd-ranked Sorribes Tormo threatening to capitalise.

A one-sided third gave the scoreline some gloss, yet tougher tests lie ahead.

After breaking early, some extremely sloppy play from Osaka opened the door for the Spaniard and the favourite lost her advantage by blasting long from the third break-point opportunity.

A strange display continued as Osaka followed up each brilliant winner with a wayward shot, wearing a bemused expression as a second lead - earned with a stunning forehand down the line - was again immediately wiped out.

Osaka managed to build on an early advantage in the tie-break, edging the opener, only to see her momentum checked by more errors after briefly leading the second.

All composure looked to have been lost as she was broken to love and a double fault gave Sorribes Tormo a third break of the second set, taking the match to a decider.

A fortunate break at the net gave Osaka control again, though, and she finally kicked on, showing just what she is capable of in a ruthless finish.

Earlier in the day, Simona Halep came through a testing first set to dispatch Johanna Konta 7-5 6-1.

Konta was on top initially and broke in Halep's second game before being pegged back. The Briton dug in and saved two set points serving at 5-4 down, but she bowed to the third seed's pressure eventually.

The second set was comfortable for Halep and she raced to victory, setting up a meeting with Viktoria Kuzmova.