Kvitova happy to 'fight it out', Stephens ousts Azarenka in Madrid 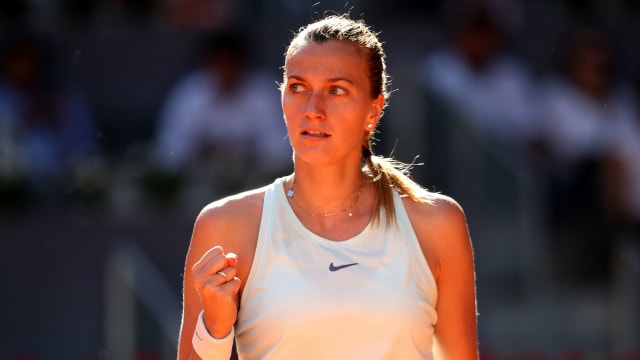 Petra Kvitova was encouraged by the way she was able to "fight it out" to beat Kristina Mladenovic, while Sloane Stephens knocked Victoria Azarenka out of the Madrid Open on Monday.

Second seed Kvitova - bidding to become the first woman to win a WTA Premier Mandatory tournament four times - had to dig deep for a 6-3 7-6 (7-5) victory on Court Manolo Santana.

Stephens was another leading to contender to advance at the Caja Magica, seeing off Azarenka 6-4 2-6 6-2 to reach the last 16.

Ashleigh Barty was also taken the distance, getting past Danielle Collins 6-1 1-6 6-1 as the Australian eyes back-to-back titles following her Miami Open triumph.

.@SloaneStephens knocks out Azarenka at the @MutuaMadridOpen

Kvitova made 38 unforced errors to 31 winners in an unconvincing performance, but battled to get through in straight sets after coming under pressure from Mladenovic in the second.

The defending champion, on a high after winning the Stuttgart Open, said: "I'm trying to play well on all surfaces which I think is really showing and it was a pretty difficult match,

"I fought hard in the end and that is what is counting. The clay and the conditions here are a bit different compared to other venues, so I always needed time to fight it out."

Sorana Cirstea or Caroline Garcia will be Kvitova's third-round opponent.

Stephens stretched her winning streak against Azarenka to four matches, having lost the first three against the two-time major champion.

The 2017 US Open champion did not face a break point in the first set, but was broken twice in the second.

Stephens pulled away in the decider, winning four games in a row to set up a meeting with Zheng Saisai or Alize Cornet.

Barty stretched her sequence of victories to 10 matches, but Collins threatened to bring her back down to earth in the Spanish capital.

The ninth seed struck only 18 winners and made just 19 unforced errors in a contest which swung one way, then the other.

Barty will face Putintseva in her third-round match in Madrid after the Kazakh got past Pauline Parmentier, conqueror of Elina Svitolina in the opening round.