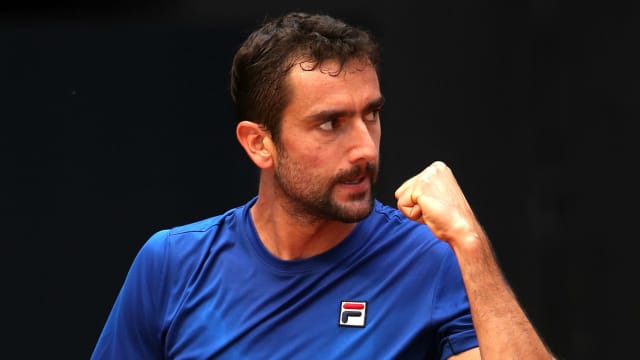 Marin Cilic saved four match points against Martin Klizan to end his losing streak in the first round of the Madrid Open and Karen Khachanov also stopped the rot on Monday.

Cilic had not been victorious since seeing off Dusan Lajovic in the opening round at Indian Wells in March and was on the brink of another loss at the Caja Magica.

Khachanov arrived in the Spanish capital in need of a lift after five consecutive defeats and got past wildcard Jaume Munar 6-4 6-7 (5-7) 6-3.

The fit-again Juan Martin del Potro was in doubles action on Monday and will make his singles return against Laslo Djere, who beat fellow Serbian Dusan Lajovic, while Gael Monfils was among the other players to start the week with a win.

CILIC BACK FROM THE BRINK

Cilic has won only one match since the Australian Open and it was looking bleak for the 2014 US Open champion as Klizan stood on the brink of round two.

Klizan failed to grasp his opportunities, making errors on three of his match points and letting Cilic off the hook with a tentative shot on the other.

Croatian Cilic finally held to force a tie-break after a marathon 12th game in the final set and brushed Klizan aside in the breaker.

KHACHANOV GOING 'BACK TO BASICS'

Russian Khachanov has endured a miserable run, but came from a break down in the first set and battled in the second before finally putting Munar away by bossing the decider.

The 11th seed said: "I am really happy with my performance today and I tried to fight until the end. It's the kind of game I've been looking for.

"I am really happy to get through to the second round, to build my confidence and go back to basics. This is the kind of win, over three hours, physically demanding, that I needed."

Del Potro is certainly putting his knee to the test in Madrid, entering the doubles with Kei Nishikori and also making his singles comeback.

The 2009 US Open champion and world number seven Nishikori fought back to defeat Fabio Fognini and Robert Lindstedt 5-7 6-4 10-4.

Del Potro has played in only three singles matches this year, reaching the quarter-finals at Delray Beach back in February, due to an injured right knee.