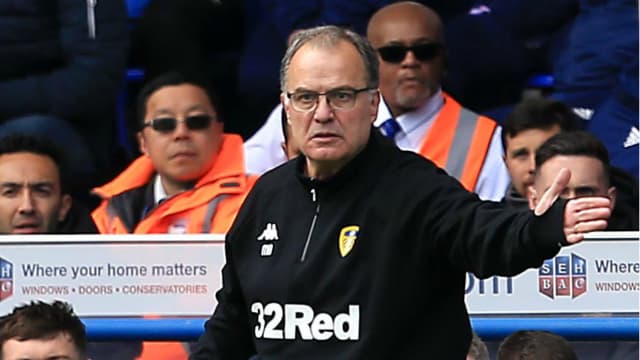 Leeds United head coach Marcelo Bielsa reacted angrily when asked by a journalist if he would 'spy' on Derby County again ahead of the Championship play-off semi-final.

Bielsa paid a £200,000 fine given to Leeds after the English Football League sanctioned the club for breaching rules relating to treating opposition teams with the "utmost good faith".

Managers including Jurgen Klopp and Mauricio Pochettino criticised Bielsa after he admitted sending a staff member to watch all his opponents in training, the story emerging ahead of a game against Derby in January.

The clubs are set to meet again in the play-offs this month after Frank Lampard's Rams won 3-1 at home to West Brom on Sunday to claim sixth spot ahead of Middlesbrough, with Leeds finishing third despite their loss at relegated Ipswich Town.

Here are the final standings in the #SkyBetChampionship#EFLpic.twitter.com/kX8KtHeF2I

After his side went down 3-2 against the 10-man Tractor Boys, a result he described as an "accident", Bielsa was asked if there could be a repeat of the 'Spygate' row and he was unimpressed with the line of questioning.

"When you have a level of ignorance and you work as a journalist, and when you have a right to ask questions and when you lie in your answers and you don't assume the irony and you keep telling what you ignore - if spying is a crime or not - you deserve a response without any conclusion.

"You make your question knowing that observing the opponent is now sanctioned, you know it perfectly and you ask. You deny the fact that you know the answer and you know I received a sanction.

"Is it a joke? If it was I don't understand it. But it's not because I don't have a sense of humour.

Lampard's first season as a manager has seen him successfully lead Derby to a top-six finish but he feels the Rams face a major challenge to reach the Premier League.

"The achievement is great to be in that bracket, with Leeds and Aston Villa, but we're massive underdogs. Let's just enjoy that tag and see what we can do," he told Sky Sports.

"I know who they [Leeds] are, I've been asked it a million times. All the history is history. These are two massive games against a team that looked like they were going to run away with it this year.

"We're going to give it everything. I think there will be motivation for everyone at the club. What we as staff and players have to do is take that away and think, 'What can we do over these two matches to win them and [get] a potential game at Wembley?'

"Take away all the spying talk, we didn't play well in either of those games and Leeds beat us well and beat us true. They were good lessons to learn.

"When I talk about us being underdogs I truly believe it. I think they're a fantastic team. We've been more inconsistent than them without a doubt, so there you go."