Svitolina beaten in Madrid, Wozniacki retires with back injury 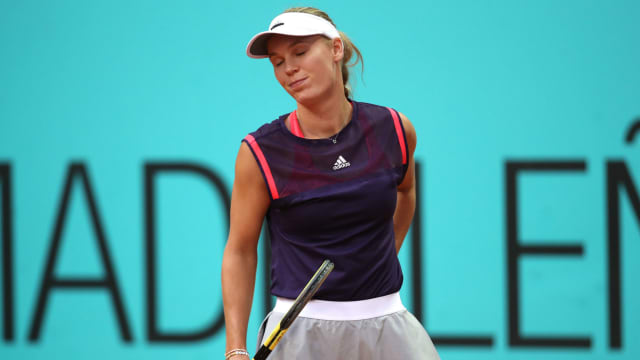 Elina Svitolina was dumped out of the Madrid Open by Pauline Parmentier and Caroline Wozniacki retired due to a back injury after top seed Naomi Osaka moved into the second round on Sunday.

Svitolina has been struggling with a knee injury but said she was prepared to give it a go and start her clay-court season at the Caja Magica.

The WTA Finals champion bowed out in the second day of the tournament in the Spanish capital with a 6-4 7-6 (8-6) defeat to world number 69 Parmentier.

Wozniacki, the 11th seed, decided she could not continue after losing the opening three games of her encounter with Alize Cornet.

Madison Keys, Wang Qiang and Julia Goerges were the other seeds to suffer first-round exits, with Garbine Muguruza also dumped out.

World number one Osaka got past Dominika Cibulkova 6-2 7-6 (8-6), going through along with Simona Halep, Karolina Pliskova, Angelique Kerber and Sloane Stephens.

OSAKA THROUGH 'ADJUSTMENT PERIOD' ON CLAY

Top seed Osaka struck 43 winners in a typically aggressive display against Cibulkova and will take on Sara Sorribes Tormo in round two.

The US Open and Australian Open champion believes she is ready to make more of an impact on clay this season.

"I feel like there's, like, an adjustment period for me and it took a few years," said the 21-year-old. "But now I'm more comfortable [on clay]. I'm not sure if it's because I had a really long training block before I came to start the season, but yeah, it feels good."

PLISKOVA BACK FROM THE BRINK, HALEP AND KERBER THROUGH IN TWO

Fifth seed Pliskova saved four match points as she came from behind to beat Dayana Yastremska.

There was no such trouble for Halep, a 6-0 6-4 winner against Margarita Gasparyan, and Kerber eased to a 6-3 6-2 defeat of Lesia Tsurenko.

STEPHENS SETS UP AZARENKA CLASH AT THE END OF MEMORABLE WEEK

Eighth seed Stephens got engaged to footballer Jozy Altidore and added Sven Groeneveld to her coach this week.

The 2017 US Open champion ended a hectic few days by seeing off Polona Hercog 6-2 7-6 (7-4) and will take on Victoria Azarenka in round two.