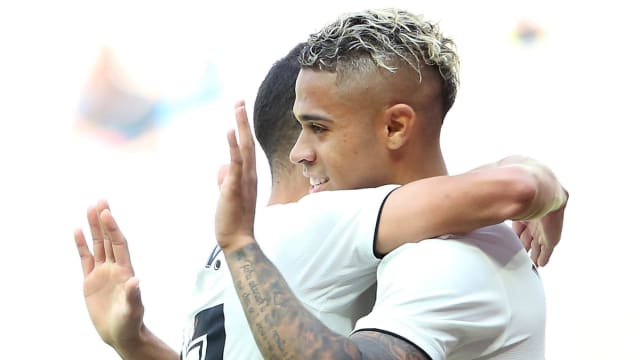 Mariano Diaz ensured Real Madrid coped without the injured Karim Benzema by scoring twice in a 3-1 win over Villarreal that helped Los Blancos bounce back from a dismal result a week earlier.

Zinedine Zidane's men did not have it all their own way against their relegation-threatened visitors, but Mariano's strikes in the opening moments of either half helped Madrid overcome the absence of their leading scorer and unsettled forward Gareth Bale, who was left out of the squad.

When careless play allowed Gerard Moreno to plunder an equaliser for Villarreal it looked as though Madrid's recent struggles would continue, but Jesus Vallejo restored calm around the Santiago Bernabeu with his first goal of the season before Mariano netted his second.

Substitute Jaume Costa had the final say courtesy of a stoppage-time effort, with the result leaving second-placed Atletico Madrid within reach for Real, who will still be left to reflect on an underwhelming campaign even if they do catch their rivals.

Madrid were toothless in their defeat at Rayo Vallecano but took the lead in opportunistic style after two minutes, Brahim Diaz dispossessing Santi Cazorla midway through the visitors' half before Mariano wriggled between two defenders and rolled a low shot beyond Andres Fernandez.

The equaliser came nine minutes later and in almost identical fashion, with Casemiro the player to concede possession cheaply to Alvaro Gonzalez before Moreno hooked the ball just inside the post with Thibaut Courtois well beaten.

Dani Carvajal crashed a shot onto the post as Madrid looked to restore their lead quickly but they had to wait until five minutes before half-time when Marcelo's drive got tangled up in the legs of Samuel Chukwueze and Vallejo was on hand to tap the ball past the stranded Fernandez.

Four minutes after the interval, Mariano timed his run perfectly as he arrived at the far post to meet Carvajal's low cross and slam the ball into the net.

Marcelo looked certain to score after his mazy dribble down the left flank took him into the box where Fernandez made an impressive one-handed save to parry his side-footed strike away from danger.

Villarreal refused to go down without a fight and their determination to grab a share of the points earned them a late consolation when Moreno played in Costa, who had time and space to pick his spot and beat Courtois with what proved to be the last chance of the game.

What does it mean? Final day drama unlikely

By the time Real Madrid return to the Bernabeu for their final-day clash with Real Betis, it is likely that second place will be beyond them, despite this victory. Villarreal, meanwhile, should have enough of a margin to ensure their top-flight status.

If Mariano can turn in more performances like this one, Zidane will feel far more comfortable about his attacking options when Benzema is not available – and perhaps will not hesitate to part ways with Bale.

Villarreal look to Cazorla for experience and composure but the 34-year-old got caught out early on, making a mistake that helped Madrid ease into the game.

Real Madrid will hope to keep the pressure on Atletico by claiming a win at Real Sociedad, while Villarreal will hope to secure their place in next season's LaLiga by beating Eibar at home.