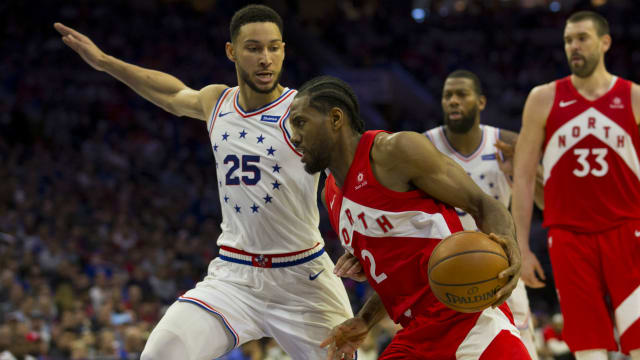 The Toronto Raptors topped the Philadelphia 76ers 101-96 to level the Eastern Conference semi-final series at 2-2, while the Denver Nuggets beat the Portland Trail Blazers.

Raptors star Kawhi Leonard torched the 76ers for a game-high 39 points and 14 rebounds in Game 4 of the NBA playoff clash on Sunday.

Jimmy Butler was a driving force for Philadelphia once again, finishing with 29 points and 11 rebounds in the losing effort as Joel Embiid struggled due to illness.

Denver stopped the Trail Blazers from going up 3-1 in the Western Conference semis by claiming a 116-112 victory in Portland.

@kawhileonard drops 22 of his 39 PTS in the 2nd half, sparking the @Raptors Game 4 road W! #WeTheNorth#NBAPlayoffs

Jamal Murray tallied a game-high 32 points and made all 11 of his free throw attempts while team-mate Nikola Jokic recorded a triple double in the Nuggets' winning effort.

Damian Lillard poured in 28 points but his fourth quarter efforts were not enough to pull Portland ahead.

The series is all tied up and Game 5 will be in Denver. The Nuggets were one of the best teams at home during the regular season in 2018-19.

JJ Redick totalled 19 points and made four three-pointers for the 76ers.

CJ McCollum finished with a team-high 29 points for Portland.

Leonard was unfazed by the pressure and sank a dagger from behind the arc in the fourth quarter.

Murray elevated over two Trail Blazers for an emphatic slam.

2nd half is underway on @NBAonTNTpic.twitter.com/Z02Orki4Cf

The Houston Rockets defended home court in Game 3 and have a chance to even the series up on Monday. The Rockets squeaked by with an overtime victory at Toyota Center despite a 46-point performance from Kevin Durant. But, Golden State Warriors star Stephen Curry probably will not be as bad down the stretch for a second consecutive game.