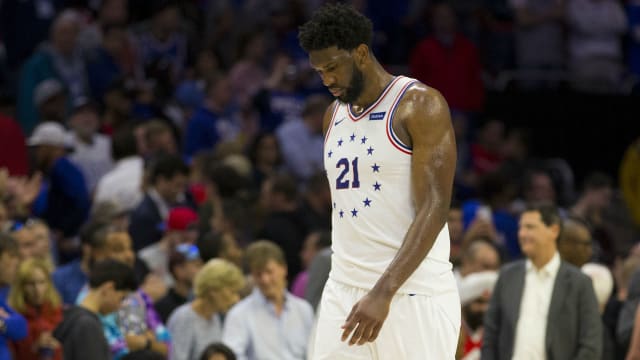 Joel Embiid revealed he played through illness in the Philadelphia 76ers' loss to the Toronto Raptors in Game 4 of the Eastern Conference semi-finals.

NBA All-Star Embiid struggled on Sunday, scoring just 11 points on two-of-seven shooting while grabbing eight rebounds as the 76ers went down 101-96 to the Raptors in Philadelphia.

Speaking to reporters after the Raptors levelled the series at 2-2, Embiid said: "I didn't have a good night.

"Didn't sleep. Guess I needed an IV at six in the morning. But, just try to play and try to get the win. Obviously, it wasn't enough."

Embiid added: "If you can't really sleep and you need an IV, it has to be pretty bad. But, it doesn't matter. Once I step on the court, I've got to do a better job."

All tied up. #PhilaUnite | #HereTheyComepic.twitter.com/aAGMBTCZzG

Despite his struggles from the field, Embiid finished with seven assists, along with two steals and two blocks.

"I got a text from him at 6:20am this morning telling me he didn't sleep all night, he really never felt this poorly and he was unsure if he was going to play," Brown told reporters.

"To his complete credit, he just kind of willed his way through. I appreciate and respect his effort to get out there and play for his team."

Embiid entered the matchup coming off one of his best performances of the playoffs. He tallied 33 points and 10 rebounds in Philadelphia's Game 3 win.

"I've got to be more aggressive," Embiid said. "Today wasn't the same as two days ago [in Game 3]. Still got to be aggressive, especially offensively."

The 76ers and Raptors will face off in Game 5 in Toronto on Tuesday.