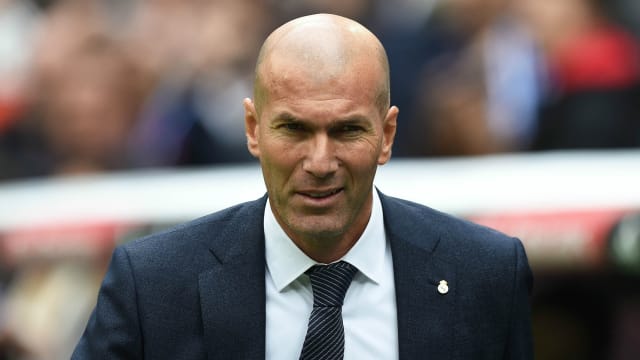 Zinedine Zidane called on his Real Madrid players to put their disappointing run of form behind them and focus on ending the campaign on a high for their fans.

Madrid have three games to go in a season to forget, starting with Sunday's home match against 14th-placed Villarreal.

Zidane's side are set to finish third in back-to-back LaLiga seasons, as they trail second-placed city rivals Atletico Madrid by nine points.

But head coach Zidane has talked up the importance of getting some wins on the board and building momentum ahead of the offseason, especially on the back of last weekend's 1-0 loss at Rayo Vallecano.

"It's not possible [to end the season now]. There are three games to play, so we're going to have to play," he said at Saturday's news conference.

"The other day [against Rayo] I was very angry but, like all the players, I know that sometimes you don't get anything and the other day we got nothing.

"As bad as this season has been, there is another game [on Sunday]. The players like to enjoy their football and that is what we are going to try to do. There will be changes to my side but many will remain.

"We want to win at the Bernabeu, we have a game to show all the people that we want to finish well and that we are going to try, that the fans are with the players. Until now we have had difficulties, we want to make a good match at least."

Madrid have collected eight points from the last 18 on offer, losing to Valencia and Rayo while also dropping points at Leganes and Getafe.

Zidane admits it is hard to take too many positives from the Rayo loss, three days on from their stalemate with Getafe, but he says Madrid will not down tools with games against Villarreal, Real Sociedad and Real Betis to come.

"We did not fail in Getafe - we played well, we missed the goal, but I was happy with the team," he said. "The other day in Vallecas, no matter how much I wanted to be an optimist, I did not like the team, but it has been six days and now we have another match and have a responsibility."

Since returning to the club for a second spell in charge two months ago, Zidane has taken the opportunity to rotate his side.

Among those rumoured to be on their way out of the Bernabeu is Gareth Bale, who has gone seven games without a goal and is not assured of a place in the starting line-up on Sunday.

"I am the coach and I have to pick the team and make the decisions," the Frenchman said. "[Bale] has to train and think about playing. The players know the responsibility they have and we all have. We will see what we are going to do [against Villarreal]."