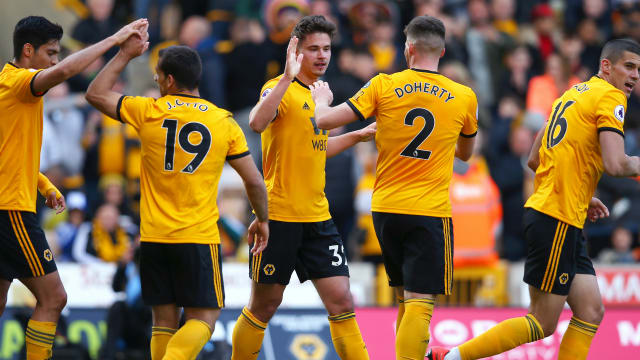 Leander Dendoncker's goal 15 minutes from time gave Wolves a 1-0 win over Fulham at Molineux, taking the hosts to the brink of securing a seventh-place finish in the Premier League.

Nuno Espirito Santo's men knew victory in their final home game of the season would leave Leicester City as the only side able to catch them in the battle for seventh, and they got the job done with a late strike.

Relegated Fulham were on course for a fourth clean sheet on the spin, but Dendoncker guided Matt Doherty's cross past Sergio Rico with a first-time finish to earn Wolves a third successive win.

Wolves are now six points better off than Leicester, who have two games in hand, the first of those away to Manchester City on Monday.

Seventh position in the Premier League will secure European football if Pep Guardiola's side beat Watford in the FA Cup final.

The final whistle blows at Molineux for the last time this season and Wolves sign off with a win. Leander Dendoncker's second half goal enough for @Nuno's men to take all three points. #WOLFUL

Rico produced a fine save with 11 minutes on the clock to tip Diogo Jota's fierce shot around the post following some impressive link-up play between Wolves' front two.

Wolves were asking all of the attacking questions as Jota came close through a couple more attempts and Dendoncker headed Joao Moutinho's left-sided delivery against the crossbar.

But the hosts were unable to find a first-half breakthrough against their lowly opponents and Fulham nearly opened the scoring via Joe Bryan's strike five minutes before the interval, which Rui Patricio was equal to.

Jota fizzed a shot wide of the far post and Aleksandar Mitrovic, kept quiet for most of the game, fired over the bar at the other end having been picked out in the box by Ryan Sessegnon.

Fulham required Rico to produce two saves in the space of a minute to keep out Ruben Neves' swerving shot and Doherty's downward header at his near post.

Wolves' pressure finally told as Dendoncker converted past Rico, who made a wonderful stop three minutes later to push aside Jota's half-volley.

Fulham, who brought on 16-year-old Harvey Elliott to make him the youngest player to play in the Premier League, failed to truly trouble their opponents in the time that remained as their winning run came to an end.

What does it mean? Seventh all but secure

Wolves were beaten by Watford in the FA Cup semi-finals but are now highly likely to earn a Europa League qualifying spot provided the Hornets lose the final to Manchester City.

Leicester could still overhaul Wolves, who head to Anfield on the final day of the season, but the Foxes must claim maximum points from daunting fixtures against league leaders City and Chelsea.

A number of fine saves from Rico looked set to earn Fulham another clean sheet, but Doherty played a key role in ensuring that was not the case.

The Wolves wing-back got in down the right on the overlap to set up the winner, making it four goals and five assists in the Premier League this season - a combined figure that only Liverpool pair Andy Robertson (11) and Trent Alexander-Arnold (10) can better.

Off day for Jimenez

Jota should have done better with the few chances that fell his way before Dendoncker's eventual winner, but he did at least find himself in shooting positions. The same cannot be said of strike partner Raul Jimenez, who seemed to be playing too deep at times and was unable to test Patricio, guiding the ball wide at the near post from the best of his chances in the second half.

Wolves conclude their campaign with a trip to Liverpool next Sunday, while Fulham host Newcastle United on the final day of the season.