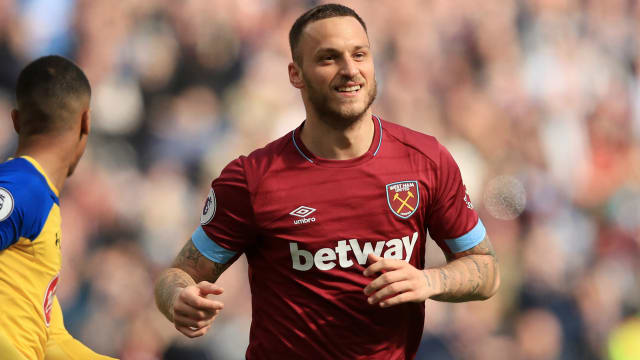 Marko Arnautovic scored a double as West Ham cruised to a 3-0 Premier League win over Southampton in their last home game of the season.

The forward netted in both halves – his first strikes since January – and defender Ryan Fredericks then sealed the points as West Ham made it back-to-back victories, having beaten Tottenham last time out.

Southampton are mathematically safe, but are now without a win in four after their opponents did the double over them for the first time since the 2000-01 season.

Stuart Armstrong fired over from an early Saints chance, but it was West Ham who struck first in the 16th minute when Yan Valery lost possession in a dangerous area, allowing Arnautovic to convert with a cool left-footed finish after Mark Noble's exquisite throughball.

Manuel Lanzini, back in the West Ham team as one of four changes, forced a save from Fraser Forster, who was making his first appearance since Boxing Day of 2017.

Forster then twice denied Michail Antonio before the break as West Ham finished the first half in control.

Nathan Redmond was brought on at half-time, but it was over an hour before Saints put Lukasz Fabianski to work for the first time in the match, the Poland keeper tipping the substitute's shot over.

Shane Long had a penalty claim denied after a key challenge from Fredericks, and West Ham put the result beyond doubt 20 minutes from time.

Arthur Masuaku surged past James Ward-Prowse down the left and saw his cross pushed out by Forster, and a deflection off Arnautovic allowed the Austria forward to head in simply from a yard out.

Three minutes later, Fredericks scored his first league goal in over five years, playing a neat one-two with sub Jack Wilshere before powering into the box and beating Forster with a low strike into the bottom corner.

Marko Arnoutovic's brace and a Ryan Fredericks goal secure all 3 points for the Hammers#WHUSOUpic.twitter.com/z6tNsHIvh3

What does it mean? West Ham finish season on a high

West Ham's season was in danger of running out of steam, but back-to-back wins for the first time since December ensure they are finishing with some momentum, with a top-10 finish still not out of the question.

Manuel Pellegrini is targeting Europe next season and does have some significant talent to work with, as this impressive performance despite the absence of Declan Rice and Felipe Anderson shows. Saints only mustered one shot on target and have stumbled over the line to secure safety, giving Ralph Hasenhuttl plenty to ponder in the offseason.

Influential Arnautovic back to his best

Arnautovic almost had a hat-trick, firing a superb effort wide in the closing stages after his clinical double. He has 20 Premier League goals and 10 assists since the start of last season, and will be crucial to Pellegrini's hopes of making the next step.

30 - Since the start of last season, Marko Arnautovic has been directly involved in 30 Premier League goals (20 goals, 10 assists), 14 more than any other West Ham player. Kingpin. pic.twitter.com/Tw43OKZZBP

Valery lost the ball for West Ham's opener, and there was no way back for Southampton from there. That was not the only time he was loose in possession on a day to forget for the full-back.

In-form West Ham finish their season away to Watford next Sunday, which is when Southampton are at home to relegated Huddersfield Town.