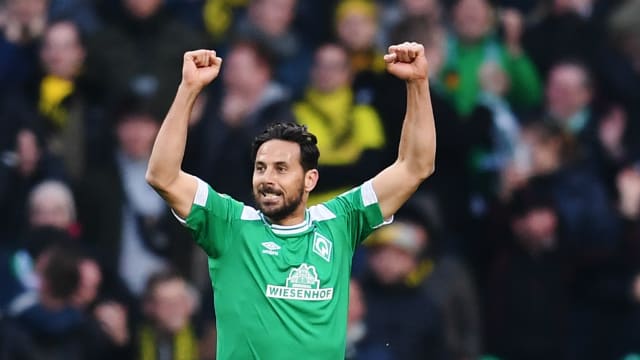 Former Bayern Munich striker Claudio Pizarro came off the bench to score an equaliser that left Borussia Dortmund's Bundesliga title hopes hanging by a thread after they threw away a two-goal lead in the last 20 minutes to draw 2-2 at Werder Bremen.

Lucien Favre's men looked to have recovered from a disastrous 4-2 Revierderby defeat at home to Schalke last time out as goals from Christian Pulisic and Paco Alcacer put them 2-0 up at half time.

The result, along with Bayern's 3-1 victory over Hannover earlier in the day, left second-placed Dortmund four points behind the champions with two games left to play, and even winning them both may well not be enough.

Dortmund led in the sixth minute when Pulisic nutmegged Milos Veljkovic before darting into the box and coolly side-footing the ball past onrushing goalkeeper Jiri Pavlenka.

Bremen regained their composure and had a foothold in the game before Pulisic again forced an error, drawing a foul that led to Alcacer's expertly taken free-kick dipping over the wall and beating Pavlenka to his left.

Thomas Delaney hit a stupendous curling effort towards goal with the outside of his left foot from 30 yards in the second half, drawing an excellent save from the leaping Pavlenka.

A Dortmund victory looked certain with 20 minutes left but Mohwald's low shot from 25 yards went through Axel Witsel's legs and then somehow flashed between Burki's hands and legs as he stooped to gather.

And five minutes later Dortmund's title hopes were dashed when Manuel Akanji tried to shepherd the ball out only to be robbed by Ludwig Augustinsson near the touchline.

He flicked the ball to Pizarro and the 40-year-old lashed it home to all but hand the title to his old club.