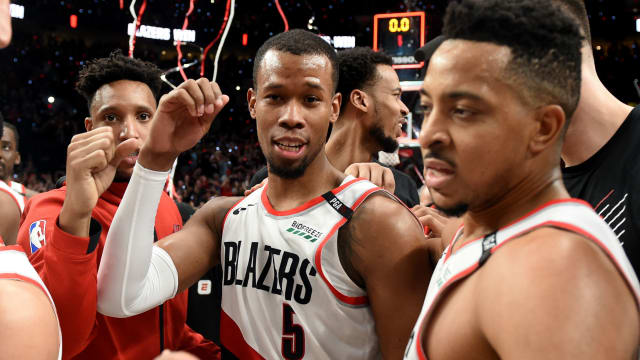 The Portland Trail Blazers defeated the Denver Nuggets 140-137 in an epic quadruple-overtime game in Rip City to take a 2-1 lead in their Western Conference semi-final series.

Damian Lillard usually headlines for the Trail Blazers, but it was CJ McCollum that led all scorers with 41 points, whilst Rodney Hood nailed the key shot from beyond the arc inside the final minute.

Portland and Denver will have to do it all again on Sunday in Game 4. The Nuggets are fresh off a seven-game series against the San Antonio Spurs and it looks like they will be pushed to the limit once again.

Meanwhile, the Milwaukee Bucks defeated the Boston Celtics on the road 123-116 to take a 2-1 lead in the Eastern Conference semi-finals.

Giannis Antetokounmpo starred as the MVP favourite had 32 points, 13 rebounds, eight assists and three blocks to lead the way for the Bucks, who topped the East with 60 regular-season wins.

The Celtics led by one at half-time, but a 40-point third quarter from Milwaukee gave them the edge and they managed to maintain control for the rest of the game.

Kyrie Irving was Boston's leading scorer with 29 points and six assists, while Jayson Tatum and Jaylen Brown scored 20 and 18 respectively to find some shooting form before Game 4.

The teams are back at TD Garden on Monday as Boston look to level the series.

George Hill scored 21 points on 9-of-12 shooting off the bench for Milwaukee.

Jamal Murray scored 34 points for the Nuggets, whilst Will Barton contributed 22 from the bench.

Eric Bledsoe scored nine points on 4-of-15 shooting in the Bucks' win.

Al-Farouq Aminu tallied six points on 2-of-9 shooting for the Trail Blazers.

Houston are 2-0 down to the defending champions, but have a chance to get back on track on home court on Saturday. The Warriors have been firing on all cylinders, yet the Rockets have managed to stay close down the stretch in this second-round series. Golden State going 3-0 up would make a Houston comeback very unlikely.