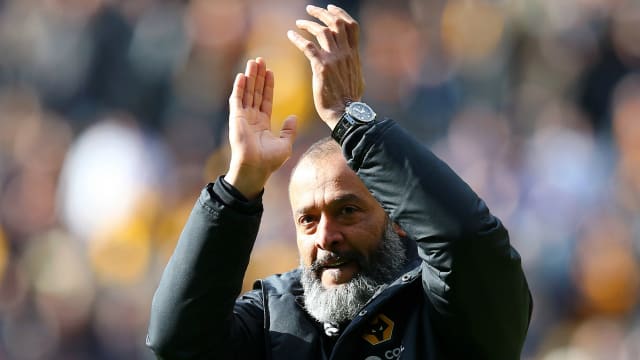 Wolves boss Nuno Espirito Santo is refusing to take a Europa League spot for granted, despite his team all but securing seventh place in the Premier League.

Nuno's men saw off a stubborn Fulham side 1-0 at Molineux on Saturday, courtesy of Leander Dendoncker's strike 15 minutes from time.

Wolves' third win in a row puts them six points clear of Leicester City, who are the only side able to deny them seventh and face Manchester City and Chelsea in their final two matches.

However, seventh will only earn a berth in the Europa League qualifying rounds if Watford are beaten by Manchester City in the FA Cup final.

Nuno is fully aware of the permutations, telling reporters after his side's final home game of a memorable campaign: "The FA Cup final still has to be played. It would be stupid to think about [the Europa League]."

The Portuguese received an honorary doctorate of sport from the University of Wolverhampton ahead of the match to mark his achievements during his first two years at the club, and the Portuguese hailed the special occasion.

"It was a special day for everybody, special for the fans," he said. "It was our last game at home this season and Molineux has given us so, so much this season.

"They deserve nothing less than what we did. How we did it is important, and I think we played good. It was very, very good for us.

"We did it at home and Molineux was so behind the team. They have pushed us so much and helped us so much, so we cannot thank them enough."

Wolves sign off in front of their home fans with a win thanks to Leandro Dendocker's fine volley#WOLFULpic.twitter.com/kxAYzJVRGz

Saturday's match was also notable for another reason as Harvey Elliott became the Premier League’s youngest ever player at 16 years and 30 days, having being brought on as an 88th-minute substitute.

Caretaker Fulham boss Scott Parker, whose relegated side had won three matches in a row prior to this defeat, said: "It was a massive moment for Harvey. I said to the boys he's not entering the field for sentimental reasons or [because] he's a young kid and we want to give him a record. He deserves it.

"We have shown real improvement and results have suggested that as well. Our main focus is planning for next year and what will be a massive campaign for us."