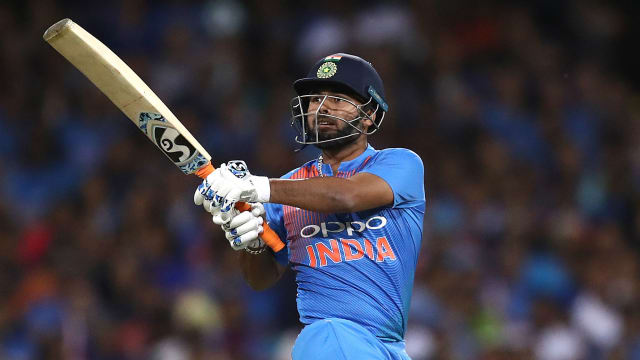 Rajasthan had to win if they were to have a chance of securing a top-four finish but Delhi, who had already qualified for the playoffs, chased down a modest target of 116 with 23 balls to spare to clinch a five-wicket victory.

The Royals were four down before the powerplay thanks to some excellent early bowling from Ishant (3-38) and Trent Boult (2-27) before Mishra (3-17) took wickets with back-to-back deliveries - a drop from Boult then denying him a hat-trick in the 12th over.

Riyan Parag (50) - twice out in the 40s earlier in the tournament - became the youngest half-centurion in IPL history at 17 years and 175 days to drag the Royals to a total of 115-9 that never looked like being enough.

Though the likes of Prithvi Shaw, Shikhar Dhawan and Shreyas Iyer all fell cheaply in reply, Pant (53 not out) stuck around to see his team over the line, sealing victory with his fifth maximum.

Heading into the playoffs with winning momentum #DCvRR#ThisIsNewDelhi#DelhiCapitals#IPL#IPL2019pic.twitter.com/HNd6sbgZNf

There have been just 19 hat-tricks in IPL history, and Delhi leg-spinner Mishra has taken three of them.

A fourth personal treble and a 20th in tournament history was on the cards when the Capitals bowler had Shreyas Gopal stumped before Stuart Binny nicked behind.

New batsman Krishnappa Gowtham then mistimed a slog-sweep first up, but confusion in the field meant Boult was late in attempting to make the catch and he grassed the chance.

OH BHAI ALMOST!!! Gowtham's top-edge does not land in Boult's hands, he survives.@MishiAmit, what an over. What a legend!!!

Two men who missed out on places in India's Cricket World Cup squad - Ajinkya Rahane and Pant - were in action on Saturday but only one of those showed evidence the selectors may have made an error.

Rahane made a century the last time these two sides met but it came in a losing cause, with Pant's 78 not out guiding the Capitals to a six-wicket win.

This time around, Rajasthan captain Rahane was out for just two while Pant made his second unbeaten half-century since being overlooked for his country's World Cup party.

A modest target was hard work for Delhi until Pant stepped up, blasting 24 off the last six balls he faced to bring about the end in a hurry.

.@RishabPant777 finishes the game with his six to get to a #VIVOIPL fifty and give @DelhiCapitals a 5 wicket win over #RR#DCvRRpic.twitter.com/yrvf4sNt7B