It's getting ridiculous - Irving furious at calls going Giannis' way 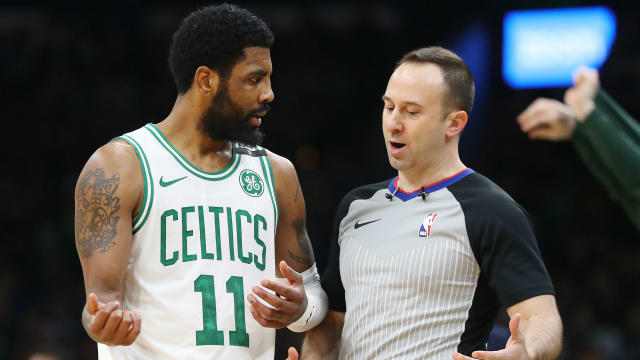 Kyrie Irving took aim at the officiating in the Boston Celtics' loss to the Milwaukee Bucks after Giannis Antetokounmpo went to the free-throw line 22 times.

The Bucks won 123-116 at TD Garden to take a 2-1 lead in the Eastern Conference semi-finals, with MVP favourite Antetokounmpo converting 16 of his free-throw attempts and finishing the contest with 32 points, 13 rebounds, eight assists and three blocks in a dominant performance.

Yet Irving, who scored a team-high 29 points for Boston, was furious with the referees for being so keen to blow the whistle and award calls in Antetokounmpo's favour.

"It's inevitable [to get caught up in a run of foul calls]," Irving told reporters.

"A guy [Antetokounmpo] comes in almost six times in a row and gets free throws. What are you really going to do?

"It's slowing the game down. So the run that you would hope to make in a quarter like that doesn't happen. He shot 22 [free throws] on the game.

The Celtics, who many hailed as the favourites to win the Eastern Conference before the 2018-19 season, will have a chance to level up the series in Game 4 on Monday.