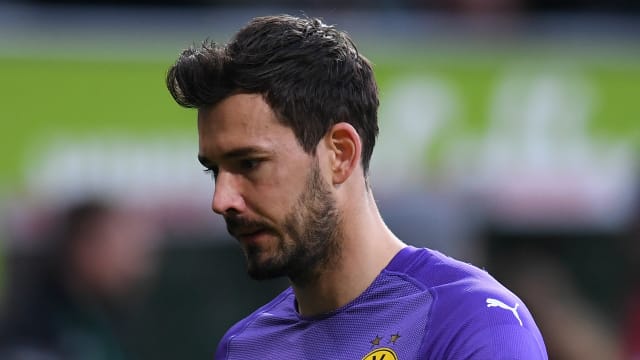 Lucien Favre defended Roman Burki after the goalkeeper's error allowed Werder Bremen back into the game in Borussia Dortmund's 2-2 draw at Weserstadion as their Bundesliga titles chances were severely dented.

With Dortmund leading 2-0 through first-half goals from Christian Pulisic and Paco Alcacer, Burki allowed Kevin Mohwald's 25-yard shot to slip through his hands and between his legs before Claudio Pizarro added an equaliser five minutes later.

The result followed Dortmund's 4-2 defeat to Schalke a week earlier but Favre refused to criticise his players after their hopes of winning a first league title in seven years faded quickly.

Giving Burki his full backing, Favre told reporters: "Regardless of what happened tonight, he has had a great season. He has also won a lot of points for us.

"The players were very disappointed, but we performed well.

"We had a good chance twice to get to 3-0, but then unfortunately we conceded two goals."

With two games left to play, Dortmund trail league leaders Bayern Munich by four points, but Favre refused to throw in the towel.

Ahead of a home game against Fortuna Dusseldorf and a final-day trip to Borussia Monchengladbach, he accepted his side would need favours from Bayern Munich's forthcoming opponents RB Leipzig and Eintracht Frankfurt in order to win the league.

"We must win the next game and hope Bayern loses to Leipzig," said Favre.

"We are not dreamers, but you never know."