Ronaldo will be fired up by Messi - Allegri 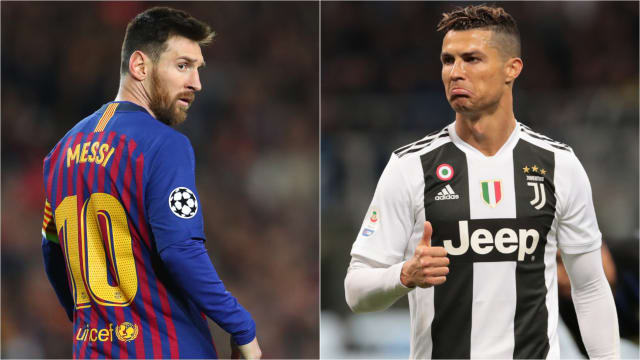 Cristiano Ronaldo will be inspired to finish the season as Serie A's top goalscorer after watching Lionel Messi's latest feat, according to Juventus coach Massimiliano Allegri.

Barcelona star Messi scored twice to inspire his side to a 3-0 Champions League semi-final first-leg win over Liverpool on Wednesday, reaching 600 club goals in the process.

Ronaldo was first to that landmark after netting in Juve's 1-1 draw with Inter last Saturday - his 27th strike since his move from Real Madrid last year.

He trails Messi by 21 goals this season, though, and is three behind Fabio Quagliarella in the race to finish as the top marksman in Serie A in 2018-19.

But Allegri thinks the 34-year-old will be fired up in the derby clash with Torino on Friday given Messi has caught him in the goalscoring stakes.

33 – Games with 2+ goals in the European Cup/Champions League history:

"Messi is a good stimulus for Cristiano," he told a news conference on Thursday. "We have a derby and Messi achieved that [600 goals] yesterday.

"He will be fired up to move ahead in the scoring and he aims to finish as top-scorer in Serie A."

Allegri also had words of praise for Aaron Ramsey, who will join the Serie A champions on a free transfer from Arsenal at the end of the season.

The Wales international has already played his last game for the Gunners, with a hamstring injury to keep him out of the final two Premier League matches and the Europa League semi-final with Valencia.

"He is a quality player, with goals in his legs, a lot of energy and great timing. He's a great signing," Allegri said.