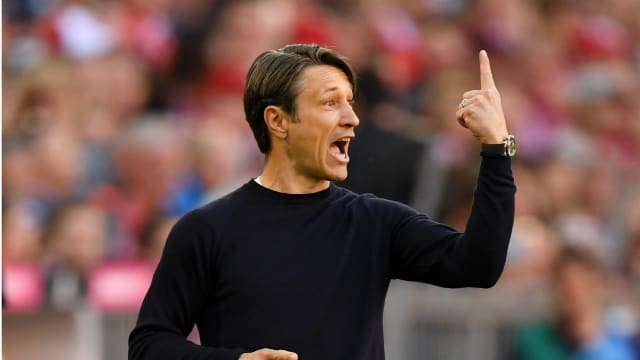 Niko Kovac has warned his Bayern Munich players to be on their guard against relegation-threatened Hannover as an unpredictable Bundesliga battle reaches its conclusion.

Bayern could have taken a huge step towards retaining their title last weekend after Borussia Dortmund were beaten 4-2 by Schalke in a dramatic and controversial Revierderby.

But Kovac's men could only draw 1-1 at second-bottom Nurnberg – their blushes partially spared by Tim Leibold's last-gasp penalty miss.

It means Bayern are two points ahead of second-placed Dortmund with three games to play.

After hosting Hannover - who could be relegated if they lose on Saturday and Stuttgart avoid defeat at Hertha Berlin - the Bavarians conclude their campaign with matches against RB Leipzig and Eintracht Frankfurt, both teams currently in the Champions League qualification places.

"The last four or five game days have produced surprising results. Teams are playing with freedom," Kovac told a pre-match news conference, noting Hannover winning for the first time since February when they beat Mainz 1-0 last time out.

"This has been seen at Hannover against Mainz. That makes it difficult for us. But we have to and want to win. They have their last chance against us.

"I'm not sure if Hannover will play offensively. We've done a lot of good games here in the last few weeks and months. If they were to attack, that would suit us.

"The players know very well that we have left a huge chance in Nuremberg. But they are only humans.

"There were many surprising results. We could have lost too. We have one point more than Dortmund than we did before."

BVB's derby day unravelled to a 4-2 defeat and red cards for Marco Reus and Marius Wolf after Julian Weigl was harshly adjudged to have handled in the area following a VAR review.

Schalke's Daniel Caligiuri cancelled out Mario Gotze's opener from the penalty spot as a result and Dortmund boss Lucien Favre raged against current interpretations of the handball rule, which he branded a "scandal" and a "disgrace".

"We should turn back the wheel. We cannot play soccer without hands," he said.

"You need your arms while running. You have to see if it was intentional."

Javi Martinez faces a late fitness test on a knee problem before the Hannover game, when Bayern will again be without James Rodriguez (muscle strain) and Manuel Neuer (calf).

Veteran wingers Arjen Robben and Franck Ribery have both been passed fit.