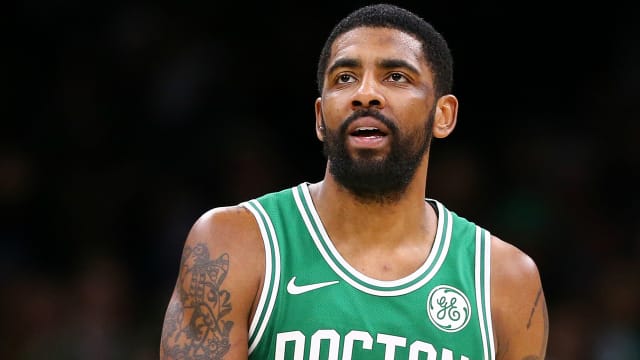 Kyrie Irving feels no added pressure following the Boston Celtics' defeat to the Milwaukee Bucks, insisting "this is what I signed up for".

The Bucks levelled the Eastern Conference semi-final series at 1-1 after Tuesday's 123-102 victory over the Celtics in Milwaukee.

Boston blitzed Milwaukee in Game 1 but Irving and the Celtics were no match for Giannis Antetokounmpo, who posted a double-double in the second showdown.

Irving scored just nine points after going four-for-18 from the field but the former Cleveland Cavaliers guard was unfazed post-game.

"Being able to go back, get back in the trenches, get ready for another battle on Friday, that's what you live for.

"Basketball is fun when it comes like this and you have to respond, and this is the type of basketball you want to be playing this time of year."

The turnaround by Kyrie... Money. pic.twitter.com/AveBhCCAWY

Game 3 of the NBA playoff clash will head to Boston on Friday and star Irving is relishing the battle against the top-seeded Bucks.

"It's the playoffs," Irving said. "We're playing against a great team. They're number one in the Eastern Conference for a reason. They finished the regular season strong, came out and did what they were supposed to do in the playoffs, and now it's two great teams going against one another.

"I've been in too many battles going back and forth to get too high or too low. Going back home you always feel good, but this one would have been great to get, but we didn't so now we go back home and reset our mindset going in and just have fun playing the game of basketball. Game 3, I'm looking forward to it."

Boston, meanwhile, managed just 10-for-28 from beyond the arc and Celtics head coach Brad Stevens added: "We weren't very good on either end, but I do think our offensive settling and some of the shots we forced probably steamrolled on us in a lot of ways.

"Hopefully we can be better at getting better shots, being able to set our defense so we're not scrambling the whole time, and then just doing a better job of really flying around and being into air space. I thought there were moments when we did it really well, and moments when we didn't."