Cardinals use six-run inning to push past Nationals 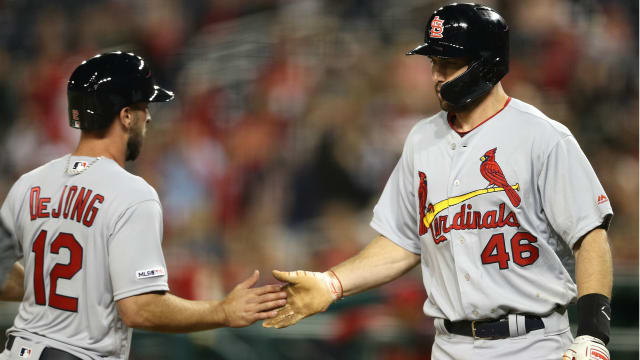 The St Louis Cardinals scored all the runs they needed in the fifth inning of their 6-3 win over the Washington Nationals in MLB.

St Louis were held scoreless through the first four frames, while Washington built an early 3-0 lead on Monday.

But, Harrison Bader hit a home run over the center-field fence and the rest of the scoring followed.

Marcell Ozuna, Jose Martinez and Yadier Molina all recorded at least one RBI and Matt Carpenter came home on a wild pitch to move the Cardinals in front.

Neither team scored again as the Cardinals held on to win.

Michael Wacha earned the win after allowing three runs and four hits while striking out five in five innings of work. Patrick Corbin was charged with the loss.

Los Angeles Dodgers star Cody Bellinger made history as he has the most RBIs ever before May 1 following his team's 3-2 loss to the San Francisco Giants.

Mookie Betts was three for four in the Boston Red Sox's 9-4 win over the Oakland Athletics. He also drove in a run and scored one, as well.

The Houston Astros were shut down on Monday. Houston went scoreless against the Minnesota Twins in a 1-0 loss. Both Jose Altuve and Yuli Gurriel went 0 for four.

Winker homers for the win

Jesse Winker blasted a home run in the ninth inning to secure the Cincinnati Reds' 5-4 win over the New York Mets.

Tampa Bay are hoping to keep their revived win streak going while Kansas City have struggled. In Tuesday's game, the Rays will start Blake Snell (2-2, 2.54) while the Royals counter with Jakob Junis (2-2, 5.57).