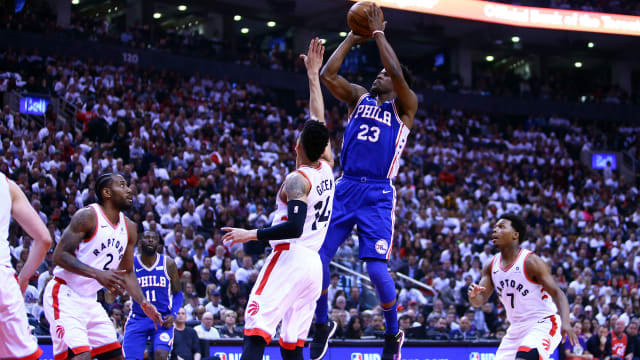 The Eastern Conference semi-final series between the Toronto Raptors and Philadelphia 76ers is tied at 1-1, while the Denver Nuggets drew first blood against the Portland Trail Blazers in the west.

After getting blown out in Game 1, Philadelphia came away with a 94-89 win over the Raptors in Toronto on Monday thanks to Jimmy Butler's 30 points and 11 rebounds.

The 76ers looked like they were going to pull away as they carried a 13-point advantage into half-time and led by the same amount with less than six minutes remaining.

But, the Raptors worked their way back into the game and cut their deficit to just one point on a Pascal Siakam layup 50 seconds from the end.

Jimmy Butler knocks down the clutch 3-pointer to help the @sixers close out Game 2 against TOR. #PhantomCam#PhilaUnite#NBAPlayoffspic.twitter.com/xKYyvix6Fl

Joel Embiid, however, answered with a driving layup in traffic to make the score 92-89. The NBA All-Star - battling a stomach illness - finished with just 12 points but scored the most important basket of the night.

Danny Green then missed an open three-pointer on the other end and Tobias Harris sealed the win with a pair of free throws.

Kawhi Leonard registered a game-high 35 points for Toronto in the losing effort as the playoff series heads to Philadelphia.

Meanwhile, the Nuggets picked up a 121-113 home win over the Trail Blazers in Game 1 of their Western Conference second-round clash.

Denver took control in the third quarter, pushing their advantage to double digits in the final period and held on for the victory.

Damian Lillard poured in 39 points on 12-of-21 shooting for Portland.

The 76ers received unexpected contributions from Greg Monroe and James Ennis III. The pair came off the bench to combine for 23 points, along with 11 rebounds in 36 total minutes of action. Monroe later left the game with an injury.

Enes Kanter, who has been dealing with a shoulder injury, tallied 26 points on 11-of-14 shooting for the Trail Blazers.

Raptors forward Serge Ibaka was one-of-five shooting and a minus-12 in the loss to Philadelphia.

Leonard with the nice cut to the basket and the slam.

Kawhi (20 PTS) cuts to the lane for the slam! #NBAPlayoffs#WeTheNorth 48#PhilaUnite 55

Gary Harris with the impressive finish.

The top-seeded Milwaukee Bucks will look to bounce back in Game 2 on Tuesday after a big loss to the Boston Celtics in the opener. Meanwhile, the Celtics have a chance to take control before the series shifts back to TD Garden.