Pliskova pulls out in Prague as Putintseva exits early in Rabat 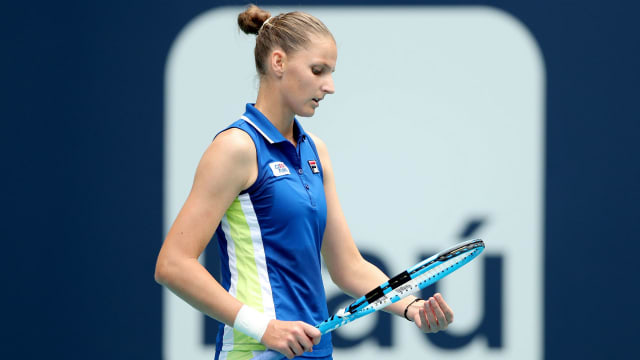 Top seed Karolina Pliskova has been forced to withdraw from the Prague Open due to a viral illness.

The world number five decided to play at last week's Stuttgart Open, losing in the last 16 to Victoria Azarenka, but has been unable to train in full for the start of the clay-court season.

"I've been in pain all month and I can't train," Pliskova said on her official website.

"On Tuesday, I was determined to opt out of the Stuttgart tournament, but in the end I tried to play. In fact, I expected the performance to be much worse."

Barbora Strycova takes Pliskova's place in the draw in Prague, where there was no play on Monday due to rain.

There was, however, action at the Grand Prix de Sar la Princesse Lalla Meryem in Rabat, including a surprise early exit for Yulia Putintseva.

The third seed claimed the opening set but eventually went down 3-6 6-4 6-3 to Tamara Zidansek after two hours and 22 minutes on court.

There was better news for eighth seed Alison Van Uytvanck - she reached the second round with a 6-4 6-3 win over Pauline Parmentier thanks to crucial breaks at the end of each set.

"I think it's always difficult to play against Pauline in the first round, especially on clay," the Belgian told the WTA Tour's website.

"I knew it would be tough, so I'm happy with the way that I played. I was playing aggressively without making many unforced errors."

Ana Bogdan defeated Alize Cornet 6-3 6-3 and there were also victories in straight sets for Rebecca Peterson and Isabella Shinikova, as they knocked out Viktorija Golubic and Tatjana Maria respectively.