Vettel banking on Ferrari upgrades in bid to chase down Mercedes 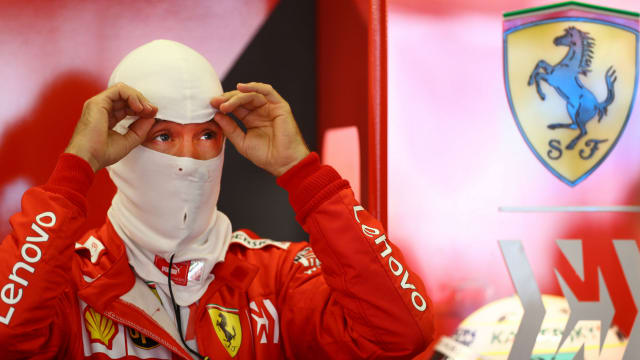 Sebastian Vettel hopes some expected upgrades will help Ferrari close the gap on Mercedes after the German finished a distant third at the Azerbaijan Grand Prix.

For the fourth successive race in the 2019 season, Mercedes claimed a one-two finish, Valtteri Bottas securing victory ahead of team-mate Lewis Hamilton.

Bottas now leads the overall standings by a point from Hamilton, with Vettel - who had been expected to mount a greater challenge this year - sitting 35 points adrift of the championship leader.

The four-time world champion revealed tyre issues hampered him in Baku, though he hopes to be able to "chase" the Mercedes duo down when battle resumes in Barcelona.

VETTEL: "It was crucial to get third, good for Charles to get the fastest lap and snatch it away from the Mercedes boys"#F1 #AzerbaijanGPpic.twitter.com/FxsccW1A5H

"The first stint was really poor I struggled to get the tyres to work, then I damaged them, then when they did get hot I couldn't use them properly," Vettel explained in his podium interview.

"They were damaged and I couldn't get a feel of confidence for the car - that's not so good around here.

"After that, I was looking forward to a difficult stint on the mediums but they got up to temperature quickly and lasted to the end.

"I think we had some pace. We had to keep an eye on Max [Verstappen] behind - with some of the lapped cars he was getting close - but we had enough pace on the mediums to keep him behind.

"We got third and there's plenty of work for us to do but at this point I think we need to maximise what we can.

"The last four races we weren't quite there so we're not the favourites going into Barcelona. We have some upgrades coming, though, and we need to chase them down."