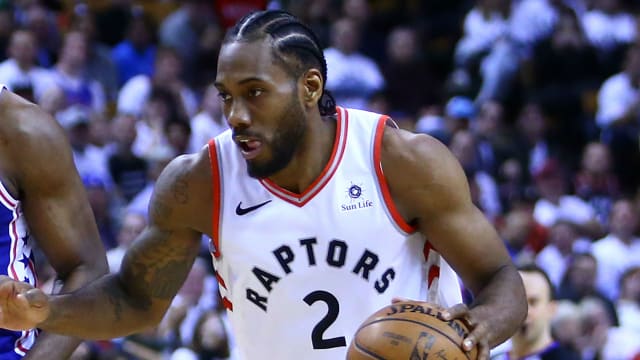 Kawhi Leonard starred the Toronto Raptors outclassed the Philadelphia 76ers in Game 1 of the Eastern Conference semi-finals, while Denver Nuggets reached the second round after topping the San Antonio Spurs.

Toronto eased to a 108-95 victory in Saturday's opener against Philadelphia thanks to Leonard's career-best postseason performance of 45 points and 11 rebounds.

Pascal Siakam chipped in 29 points to be the only other Raptor in double-digits. The two carried the load and had 49 of the team's 61 first-half points on home court in Toronto.

The 76ers did not have an answer for the Raptors, who started the game making 13 consecutive field goals in the first quarter to build a lead they would push to 20 at one point in the fourth quarter.

While the NBA semi-finals have officially started, the first round of the playoffs came to an end following the Nuggets' 90-86 win against the Spurs.

The Nuggets broke a decade-long streak of failing to win a playoff series by edging the Spurs courtesy of Nikola Jokic's triple-double – 21 points, 15 rebounds and 10 assists helping secure a showdown with the Portland Trail Blazers.

Jokic, who logged a career high in minutes for a regulation game, shot nine of 26 from the field on top of a tireless defensive performance that shut down Spurs stars.

LaMarcus Aldridge and DeMar DeRozan were held to 16 and 19 points respectively, while the team's best player came off the bench. Rudy Gay tried to put the Spurs on his shoulders behind a team-high 21 points.

Did we mention Leonard had 45 points? It is worth saying again. Since joining the Raptors this season, the three-time All-Star has been their star player and in the playoffs, it is no surprise Leonard been their biggest contributor. He was 16-of-23 shooting from the field and three of seven from long distance in the first semi-final game.

Jokic has been a stud in his playoff debut, but it was Jamal Murray who led the Nuggets. He finished with 23 points on nine-of-19 shooting.

The first-quarter Spurs get this nod. They scored just 13 points in the opening frame and allowed the Nuggets to build their lead early. By half-time, San Antonio was shooting just 22 per cent from the field. Although it came close to tying the game, the opening woes caught up with the five-time champions and their season came to a close.

You do not want to get in either guy's way as Leonard denies Tobias Harris and Siakam finishes with the slam!

Jamal Murray with the CLUTCH RUNNER to propel the @nuggets in Game 7! #MileHighBasketball#NBAPlayoffspic.twitter.com/2wDVvdKK8l

This should be a good one. Sunday marks the start of the Western Conference semi-finals where the Houston Rockets will face the Golden State Warriors at Oracle Arena. MVP favourite James Harden and company will hope to take advantage of the battle-tested Golden State team. The Warriors are coming off a tough six-game series where they had to withstand the hungry Los Angeles Clippers and saw two stars suffer ankle injuries. Both Stephen Curry and Klay Thompson were listed as questionable on Saturday per head coach Steve Kerr. Meanwhile, Houston have had plenty of rest after wrapping up their 4-1 first-round series against the Utah Jazz on Wednesday.