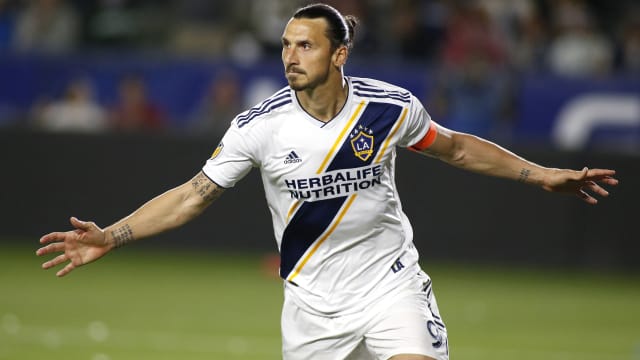 Uriel Antuna's tap-in for the Galaxy had been cancelled out by Donny Toia in the second half.

But Ibrahimovic struck his eighth goal of the season, side-footing in a Sebastian Lletget cross for the winner.

You don't want to upset the Lion.

The result moved the Galaxy to within a point of Western Conference leaders Los Angeles FC, who drew 1-1 against nine-man Seattle Sounders at CenturyLink Field.

Seattle struck after just 45 seconds through Jordan Morris, who intercepted a poor back pass to open the scoring.

However, Vela scored his 11th goal of the season just three minutes later, the Mexican tapping in a Diego Rossi cross.

The Sounders were reduced to 10 men in the 18th minute when Cristian Roldan was sent off for making contact with the face of Eduard Atuesta in a scuffle.

Christian Ramirez missed the best chance of the second half when he somehow put an effort over from point-blank range for LAFC.

In an end-to-end finish to the game, Kelvin Leerdam was also sent off for the Sounders, who held on for a point.

Montreal Impact moved level on points with DC thanks to a 1-0 victory at home to Chicago Fire.