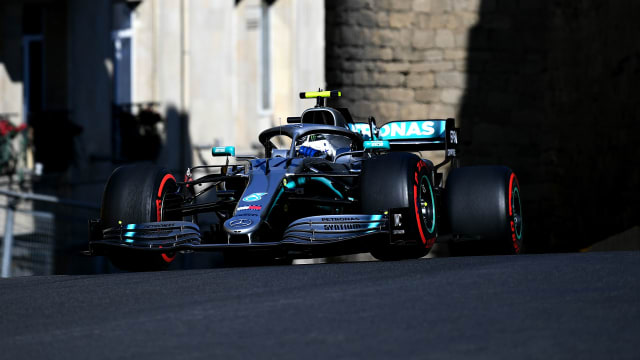 Mercedes became the first team to start a Formula One season with four successive one-twos after Valtteri Bottas led Lewis Hamilton home at the Azerbaijan Grand Prix on Sunday.

The history-making Silver Arrows locked out the front row in qualifying and Bottas - who was cruelly denied a win in Baku last year after driving over debris late on - converted pole position to move one point clear of Hamilton in the drivers' standings.

Sebastian Vettel took the final step on the podium as Charles Leclerc, who led the race for a long period, paid the price for waiting too long to pit and finished behind Max Verstappen in fifth – an extra point for setting the fastest lap providing minimal consolation for the Scuderia youngster.

A virtual safety car deployed with 11 laps remaining threatened to set up a tense finale with the front four on the medium tyre and the Monegasque on the soft compound, but Bottas and Hamilton held on to continue the German team's phenomenal start to the campaign.

Hamilton got away well and almost sent Bottas into the wall out of turn one, the Mercedes pair racing wheel-to-wheel through the first few corners.

Those opening few corners though... Wheel to wheel! #AzerbaijanGPpic.twitter.com/30pEkjZdnd

Having crashed out of qualifying Leclerc started on the medium compound and, despite slipping down to 10th early on, built a lead of over 12 seconds as the leading cars on the soft tyres pitted.

Bottas, Hamilton and Vettel closed in midway through the race but Ferrari kept Leclerc out and he ended up pitting from fourth, gifting his rivals quicker lap times with the benefit of DRS.

There was no change in the final 10 laps and, although Leclerc set the fastest lap after receiving a second fresh set of tyres, Mercedes comfortably completed a record-breaking one-two.