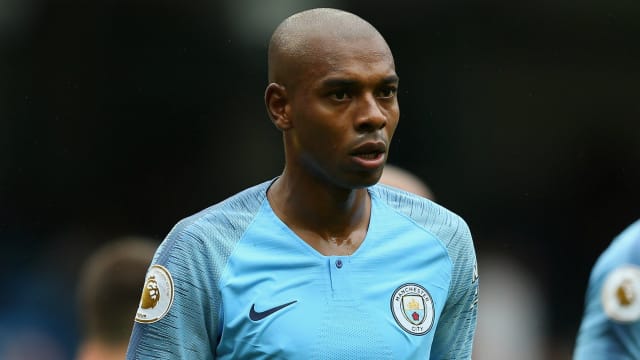 Fernandinho is absent from the squad for Manchester City's Premier League clash at Burnley on Sunday.

The Brazil midfielder was substituted during City's win at Old Trafford in the Manchester derby on Wednesday.

And Fernandinho's knee problem means he misses the trip to Turf Moor, with City also without Kevin De Bruyne and Benjamin Mendy due to injury.

Bernardo Silva and David Silva start in midfield with Ilkay Gundogan expected to deputise for Fernandinho in front of a City defence led by captain Vincent Kompany.

Leroy Sane came on for Fernandinho to score the second goal for City against Manchester United and is rewarded with a start, providing attacking support for Sergio Aguero and Raheem Sterling.

How we line-up against Burnley this afternoon...

Burnley are unchanged from their 2-2 draw at Chelsea on Monday, after which Blues defender David Luiz blasted Sean Dyche's tactics as "anti-football".

City will be champions again if they win their last three games of the season, with Liverpool's 5-0 home win against Huddersfield Town piling on the pressure.