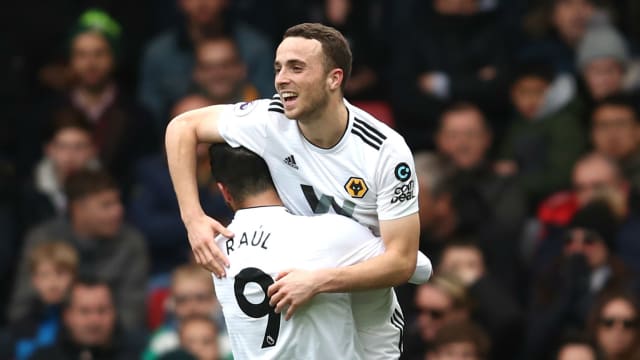 Javi Gracia's side came from two goals down at Wembley on April 7 to book a final against Manchester City but slipped to a defeat on Saturday that leaves them four points behind Nuno Espirito Santo's seventh-place side.

Raul Jimenez continued his impressive season, heading home shortly before the interval to put the visitors ahead, but a mistake from Ryan Bennett gave Andre Gray the opportunity to equalise shortly after the restart.

The game looked to be petering out for an uninspiring draw but Jota – who scored in Wednesday's superb 3-1 win over Arsenal – secured all three points 13 minutes from time.

Both sides looked sluggish in the early stages and it was not until the 33rd minute that the first chance was carved out. Jimenez thought he had put Wolves ahead but Etienne Capoue superbly hooked his bundled effort off the line.

Will Hughes then squandered a glorious opportunity to score, inexplicably heading over from just five yards out.

His misery was compounded four minutes before the interval when Jimenez met Jota's cross just six yards out to head home his 13th Premier League goal of the campaign.

Watford pulled level four minutes after the restart and were given a helping hand by Bennett. The Wolves defender's careless pass across the backline was intercepted by Deulofeu and despite Rui Patricio getting down quickly to deny the Spaniard, Gray was on hand to lash home the loose ball from 15 yards.

Jota was to have the final word, however, taking advantage of Ben Foster's rash decision to come for Ruben Neves' cross and steer home to secure a second consecutive Premier League win for Nuno's side.

What does it mean? Wolves' stunning season continues

Wolves never reached the heights of their superb win over Arsenal on Wednesday but still had enough to edge past their rivals for title of 'the best of the rest'. Nuno's side boasts brawn and skill in equal measure, and it will be thrilling to see what they can achieve in their second season in the top flight.

Watford, meanwhile, can be forgiven for having one eye on next month's FA Cup final against City but they need to avoid slipping into a funk that cannot be arrested before then.

Jimenez proves his worth

It is little wonder that Wolves have opted to turn Jimenez's loan move from Benfica into a permanent one for a club record fee. The 27-year-old has shown superb composure in front of goal this season and appears to be the perfect target man for Wolves' other attackers to work off.

Foster's rashness costs his side

Had Foster opted to stay on his line for Neves' cross it is unlikely Jota would have scored. He did not, though, and his moment of madness gave the Portuguese the simple task of slotting home to secure maximum points for the visitors.