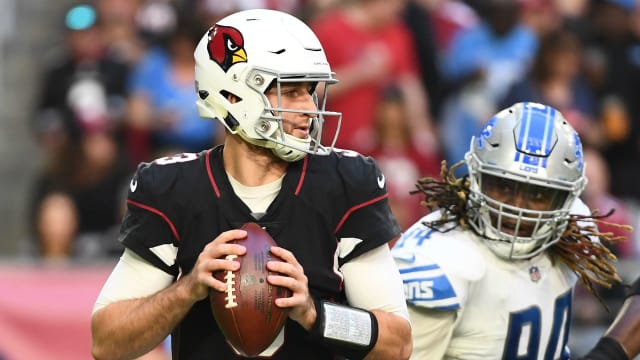 The second day of the 2019 NFL Draft was dominated by a player not on the board as Josh Rosen found a new home with the Miami Dolphins.

Speculation over where Rosen's future would be was the main focus of the build-up to Friday's proceedings after the Arizona Cardinals selected Kyler Murray first overall on Thursday.

Miami, in need of a long-term answer at quarterback, were regarded as the most likely team to pursue Rosen, the 10th overall pick in last year's draft. And, after trading out of the 48th pick, eventually sent the 62nd pick and a 2020 fifth-rounder to Arizona to seemingly make him their franchise quarterback.

While Rosen appears to be the future in Miami, Drew Lock will one day have the keys to the offense of the Denver Broncos, having seen his draft wait end at pick number 42. The Missouri signal-caller will sit behind Joe Flacco in Denver, but is likely to have a better chance of playing as a rookie than West Virginia's Will Grier, who went in the third round to the Carolina Panthers, whose unquestioned starter Cam Newton is coming off shoulder surgery.

Like Lock, D.K. Metcalf was expected to be a first-rounder. However, the Ole Miss receiver who starred at the combine had to wait until the final pick of the second round to hear his name called by the Seattle Seahawks.

Is it just us or is it getting dusty in here? @dkmetcalf14, we're so excited to have you. #SeahawksDraftpic.twitter.com/Uh3H0sZ85P

His former college team-mate A.J. Brown went to the Tennessee Titans on a day on which receivers were taken frequently, the San Francisco 49ers giving Jimmy Garoppolo two new weapons at the position in South Carolina's Deebo Samuel and Jalen Hurd of Baylor.

The Kansas City Chiefs used their first pick of the draft on Georgia speedster Mecole Hardman amid doubts over Tyreek Hill's future with the team. Safety Taylor Rapp went 61st overall to become the first pick of the Los Angeles Rams, who then provided some insurance for Todd Gurley at running back by selecting Memphis' Darrell Henderson.

After making the big splash of the offseason by trading their first-rounder for Odell Beckham Jr, the Cleveland Browns finally entered the draft at pick number 46 and landed a potential starter at cornerback in LSU's Greedy Williams.

He may soon be seen as one of the steals of the draft along with Michigan's Chase Winovich, who should provide a productive presence on the New England Patriots' defensive line after somehow falling to them at 77.