Odoi was out cold but he's okay now – Parker 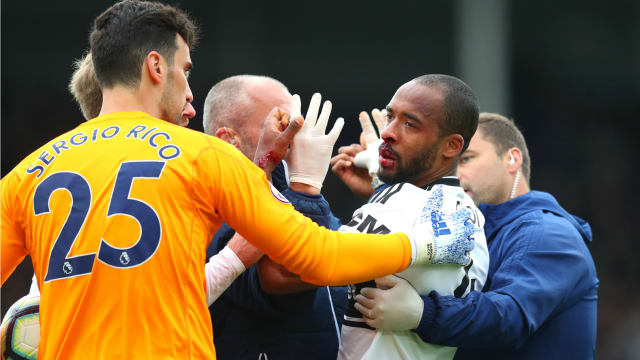 Denis Odoi was "out cold" after suffering a head injury against Cardiff City but is okay now, according to Fulham caretaker boss Scott Parker.

Odoi was struck down after being inadvertently caught in the face by the boot of colleague Maxime Le Marchand.

The defender initially seemed to want to play on, but after attention from medical staff he laid down on the Craven Cottage pitch.

Physios from both clubs attended to Odoi, who was given oxygen, and he was placed in a neck brace before leaving the field on a stretcher.

Parker, though, indicated Odoi's injury was not as serious as feared.

"Concussion protocol meant he had to come off but he's all good. I've been told he's okay.

"He's obviously not aware that he's jumped up and when you're knocked out you can become a little aggressive, but the medical team were first-class in getting him off and getting him healthy.

"I've only seen it real time and it looked like he was out [unconscious] when he hit the ground."

Scotty was thrilled with how we dealt with Cardiff's physical threat.#FULCAR#COYW

Cardiff boss Neil Warnock has regularly complained about referees this season, but he praised Chris Kavanagh despite suggesting the official missed a foul in the box on Sean Morrison by Aleksandar Mitrovic.

"I thought, for a change, he was as good a referee as we've had this year," he said. "I think he missed a penalty early doors. Mitrovic on Morrison, which he does every time we play Fulham.

"But it’s difficult to understand that. The fourth official said he didn't think there was much in it but I asked him 'how would he win a header, with both hands wrapped round him like that?'.

"So I haven’t really got a clue what the answer is."

Warnock also explained why Josh Murphy was not in the squad to face Fulham.

"He's been poor in training. No excuse," he added.

"I could have said he had something creaking in his back or something, couldn't I? But he's been poor in training."

Defeat for Cardiff and Brighton and Hove Albion's draw with Newcastle United means the Bluebirds are four points from safety with two games remaining.