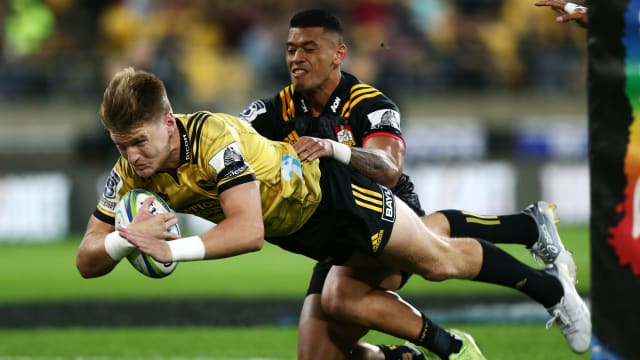 Jordie Barrett sparkled on his return to full-back as the Hurricanes hammered the Chiefs 47-19 and the Sharks claimed a Super Rugby win over the Waratahs after Jed Holloway was red-carded.

The versatile Barrett has taken up several positions in the backline this season and he excelled in the number 15 shirt in the wind at Westpac Stadium on Saturday.

Barrett scored two early tries and laid on another for Wes Goosen, while Kane Leaupepe, TJ Perenara, Ardie Savea and debutant Salesi Rayasi also crossed in a devastating display from John Plumtree's side.

The brilliant Barrett took a pass from hooker Asafo Aumua to go over just three minutes in and the All Black quickly capitalised on suspect defending from the Chiefs to add a second, assisted by Goosen.

Leaupepe and Perenara added further scores, with Luke Jacobson and Ataata Moeakiola touching down at the other end in a first half that ended with the home side leading 28-12.

Lachlan Boshier sold a dummy to dart inside for a third Chiefs try, but Goosen and Savea put the Hurricanes out of sight and wing Rayasi made an instant impact off the bench by bursting over for a try just after coming on.

Beauden Barrett successfully converted for a sixth time in a third successive win for the Hurricanes, which leaves them seven points behind New Zealand Conference leaders the Crusaders.

The Sharks claimed a first win in Sydney for 19 years, triumphing 23-15 after Waratahs lock Holloway was dismissed for striking Thomas du Toit in the face early in the second half.

Daniel du Preez and Andre Esterhuizen crossed and Curwin Bosch booted 13 points, with Bernard Foley failing to salvage a bonus point for the Waratahs when he proved unable to convert his own try right at the end.