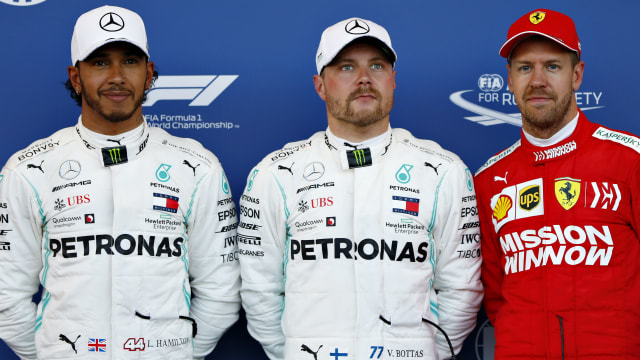 Lewis Hamilton was stunned to see Mercedes get the better of Ferrari in qualifying for the Azerbaijan Grand Prix, but rued two mistakes that cost him the pole position claimed by team-mate Valtteri Bottas.

Bottas will lead an all-Mercedes front row for Sunday's race in Baku, as his team seek a record-breaking fourth-straight one-two finish to begin the 2019 season.

The result in Saturday's qualifying session was a surprise given Ferrari's pace throughout the weekend, with the Silver Arrows' cause helped by a significant crash for Ferrari's Charles Leclerc in Q2 that meant he could not run in the final session.

Sebastian Vettel will start the race in third, with Leclerc down in ninth – and defending champion Hamilton accepted the result was beyond his best realistic targets.

"I honestly did not think we would be on the front row," Hamilton said to Sky Sports.

"Naturally I'm always hopeful but the Ferraris were showing pace that we couldn't really, truly match.

"I don't know what happened with Seb but I don't think he had a tow, which is where he was missing out. That's worth four-tenths, five-tenths.

"This is a massively great result for us. We came here without an upgrade, the Ferraris looked particularly quick and also Max [Verstappen] - so for us to lock out the front row in the circumstances I'm really grateful for. It puts us in a fighting position.

"I should've been on pole but Valtteri did a great job."

HAMILTON: "It's been so tight between us all weekend, but Valtteri did a terrific job today. Ferrari have been so quick here, so this front row lockout is a massive result for us" #AzerbaijanGP#F1pic.twitter.com/4cFM6nI27b

Hamilton explained how Bottas had got the better of him by just 0.059seconds.

The Briton added: "It wasn't about [Bottas getting a better tow] - I basically fluffed turn one and two and came out of there three-tenths down compared to my previous lap.

"I don't know if my tyres weren't warm enough or not. The guys were all backing up so I was one of the last cars and struggled a little bit. I got to turn one and had a bit of an oversteer moment and had to have a lift so I was down [on time].

"Same thing happened in turn two. I came out of it and I was like, 'Shall I stop, no I'm going to keep pushing'. I regained all that time and I came across the line a tenth up. [Bottas] then came in and I was half a tenth down, so three tenths [from my mistakes] would have been enough – it's 'woulda, coulda, shoulda'.

"Valtteri is always quick here and I've had my work cut out this weekend."